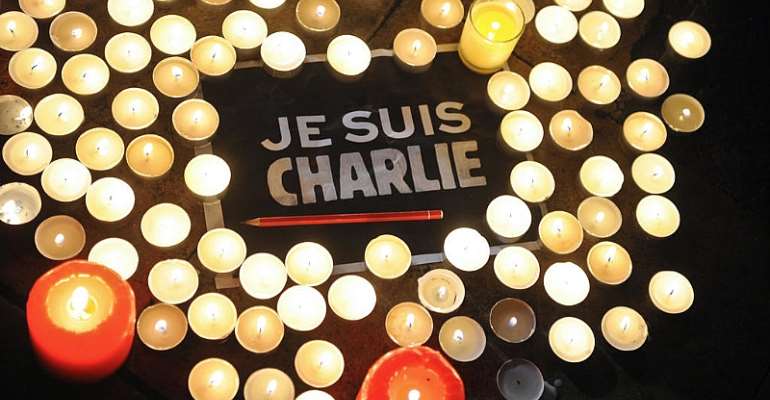 As the Charlie Hebdo terrorism trial gets under way, France is once again stewing over where the line between free speech and hate speech is to be drawn, with the satirical weekly's lawyer warning that “republican values are under threat” as freedom of expression is whittled away.

“All this, for that,” the magazine's front cover proclaims in bold print that encircles reprinted caricatures mocking the Prophet Mohamed – the same divisive cartoons that prompted Islamist gunmen to attack the Charlie Hebdo newsroom in January 2015.

President Emmanuel Macron has neither condemned nor condoned Charlie's Hebdo's editorial choices, but on the eve of the trial he offered the reminder that in France “there is a freedom to blaspheme”. That right is attached to France's freedom of conscience, Macron said, adding: “I am here to protect all these freedoms.”

Indeed blasphemy has not been an offence in France for centuries, with the exception of the eastern region of Alsace-Moselle, twice annexed by Germany, where blasphemy laws are still a part of the old penal code.

On the morning of the trial of 14 alleged accomplices to assaults on both Charlie Hebdo and a Jewish supermarket, the magazine's lawyer, Richard Malka, told France Inter radio that freedom of expression would always win out in the end.

However he warned that terrorists were enjoying a “temporary victory”, adding that even university students are afraid to speak freely or burn books as they once did.

“Freedom of expression is threatened today, and no less than it was five years ago,” Malka said, lamenting what he called a loss of critical spirit.

"Strangely, the appetite for censorship has migrated from right to left, under the principle of 'no one should be offended'. But to avoid offending anyone, you'd have to live in a cave."

Several of France's most celebrated cartoonists were killed during the 7 January rampage, which sparked the “Je suis Charlie” slogan, prompting millions take to the streets in defence of freedom of speech.

In the magazine's latest edition, which went on sale at noon, Charlie Hebdo's editors write: “We have often been asked to publish new Mohamed cartoons, but we have always refused. Not because it is forbidden, but because we needed a good reason, a reason that adds something to the debate.”

The start of the trial, they added, “seems to us to be a good reason”.

Those touched by the attack have expressed relief that the trial, delayed for four months by the coronavirus pandemic, is finally getting started. Emotions are running high, with Charlie Hebdo's managing editor Riss, who survived by playing dead, cautioning “the hatred that struck us is still there”.

Entering the fray Wednesday was Marie Dosé, a lawyer representing one of the 14 defendants, who is suspected of having provided weapons for the attackers. A counter voice to fevered commentary surrounding the trial, Dosé warns we must be careful not to make the wrong enemy.

“We need to understand that those responsible for these attacks are dead,” she said, in reference to brothers Saïd and Chérif Kouachi and Amedy Coulibaly, jihadists who were killed in the aftermath of their crimes.

"We must hear and bear the fact that the accused knew nothing of the precise criminal intent of the perpetrators of these attacks … The civil parties need to have their say on the stand; it's important.”

Dosé also gave assurances the defence would be approaching the trial – described as a crucial event in France's contemporary history – with “great serenity”, adding: “This is essential when emotions are overflowing from all sides.”

The trial is being held at Paris's Special Assize Court and will continue until November.