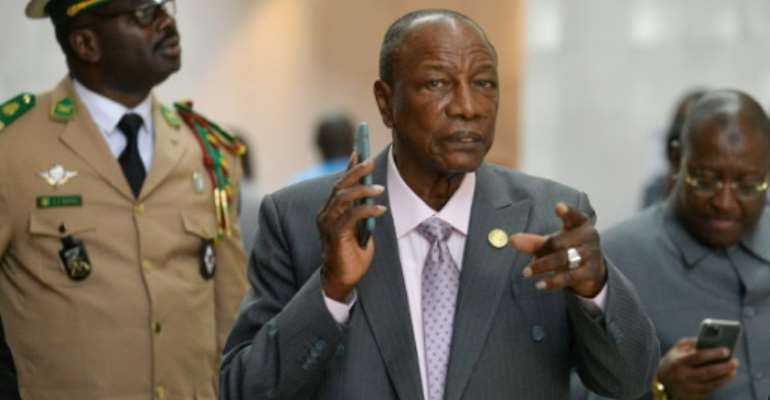 Conde has faced mounting opposition in his second term in office. By Michael TEWELDE (AFP/File)

Guinean President Alpha Conde declared Wednesday that he would seek a third term in elections on October 18, confirming long-expected plans that have already triggered deadly unrest.

"I am now committed, because you were the ones who decided that I should commit," the 82-year-old leader said in a video conference to women supporters campaigning for him to run again.

Conde, nearing the end of his second and final spell in office, this year pushed through a revamped constitution that opponents say was crafted to reset the term counter.

Conde had until now refused to spell out whether he would seek re-election, saying only that this was a question for his party, the Rally of the Guinean People (RPG).

The speculation came to an end on Monday, when the RPG issued a statement on TV saying "Conde will indeed be our candidate," a position now confirmed by the president himself.

The National Front for the Defence of the Constitution (FNDC), an umbrella grouping of parties, labour unions and civil society groups, on Tuesday lashed the bid as "outrageous and conflict-inducing".

It said its protest campaign would soon enter a "decisive phase," but gave no immediate further details.

Conde is himself a former opposition figure who was jailed under previous regimes.

The former French colony is replete in minerals but mired in poverty and instability.