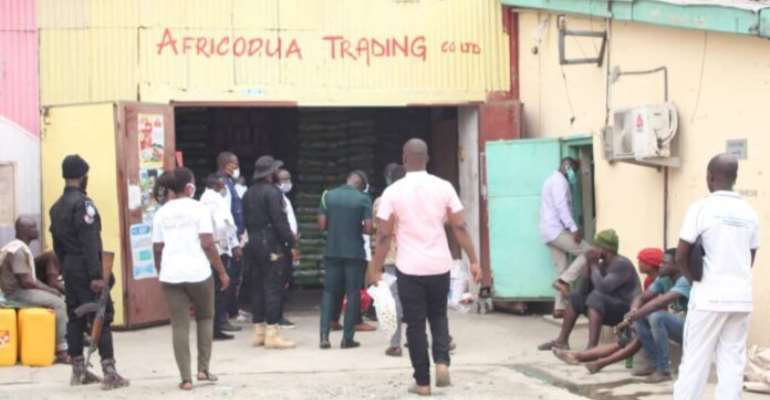 Thirty-Nine (39) out of 40 retail shops owned by foreigners in Koforidua visited by the Technical sub committee on the Committee on Foreign Retail Trade were found not to have the necessary documents to do business in Ghana.

Owners of the shops have been issued a 14-day ultimatum to regularize their documents with the appropriate regulatory bodies or risk being closed down.

The Technical sub committee on the Committee on Foreign Retail Trade made up of personnel from Immigration, Ghana Revenue Authority, Standard Authority, Police, Customs and Members of Ghana Union of Traders Association on Tuesday began a three day document verification of all foreigners operating businesses in Koforidua.

Many of the shops visited were Mobile Phones and Accessories shops owned by Nigerians as well as Rice shops owned by Indians and Labanese. Only one out of the 40 shops had all valid documents, the rest were either operating with expired documents or failed to produce documents demanded from them.

Leader of the Technical sub committee on the Committee on Foreign Retail Trade, Edward Adjenim Boateng told Kasapa News, the exercise in Eastern Region is a quite different from other regions visited because this is the first time such exercise is being conducted in the region hence given the culprit foreigners in retail business 14 days grace period to secure all the needed documentation .

He said the Presidential Taskforce will subsequently be deployed to clamp down on those who fail to secure all the needed documents required to operate business in Ghana which their shops will be close down.

President of the All Nigerian Community in Eastern Region Rev. Paul Olabisi told Kasapa News the exercise has been satisfactory adding that leadership of the Nigerian community will ensure registered members secure all the needed documents within the stipulated days.