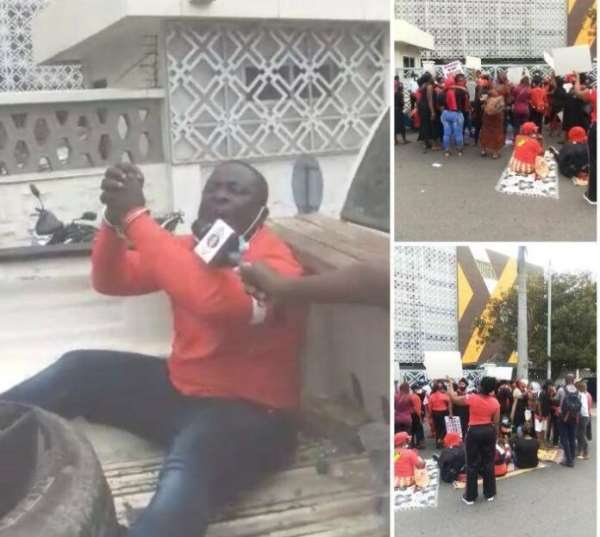 Customers of collapsed Fund Management Companies have threatened to cause an Arab Spring in Ghana should the police continue to harass them in their effort to demand payment of their locked up funds.

Three members of the Coalition of Aggrieved Customers of the collapsed 53 Fund Management Companies were on Tuesday arrested for leading a protest at the premises of the Finance Ministry.

Police say the leaders were arrested for staging an unlawful protest.

Members of the group besieged the Ministry of Finance on Tuesday, September 1, 2020, to protest over the exclusion of members of Blackshield Capital Limited from the government’s proposed bailout packages for customers of the defunct fund management companies.

The group embarked on the protest after reports that some affected customers would not be part of the government’s bailout package for the sector.

The Securities and Exchange Commission (SEC) which made the announcement in a statement said customers of Blackshield and three other firms would not be part of the bailout package because owners of such companies had challenged the revocation of their licenses in court.

Speaking to Akwasi Nsiah of Kasapa News, the Spokesperson for the Coalition, Charles Nyame stated that the customers will not fall for what he described as Police intimidation but they’ll continue to raise their voices high in all legitimate means and agitate for their locked funds to be released until the government intervenes.

The customers warned that should the police stand in their way during their next action after they dutifully serve them (police) notice, they may be forced to explode.

“We’ll continue to use our civil rights to demand what is ours. The Police will say we didn’t serve them notice but it was not a planned activity it was a spontaneous thing. People wanted to go to the Finance Ministry themselves to find out why they are not part of those penciled to be paid. We are going to make sure that in our subsequent event as such we will serve the police notice and we beg them, if we serve them they shouldn’t be an impediment because we the customers are in desperate times. If the Police should impede our efforts we may be forced to cause something similar to the Arab spring, but we don’t want to get there. We’ll continue to agitate within our civil right to get our monies,” Spokesperson for the Coalition, Charles Nyame stated.