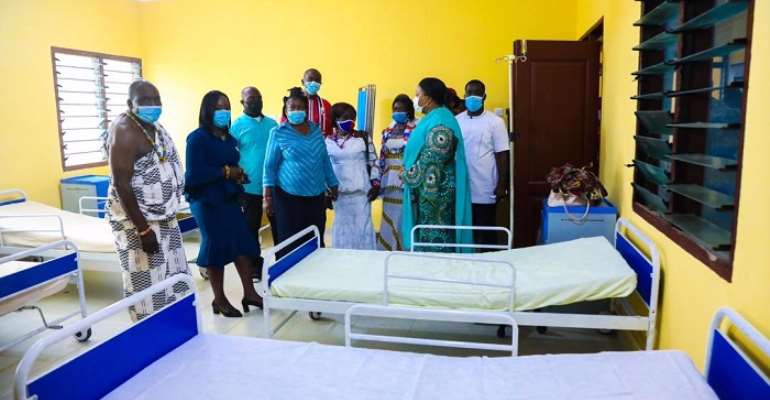 Mrs Rebecca Akufo-Addo in one of the wards.

First Lady, Rebecca Akufo-Addo has opened a health centre for the people of Kwame Anum community and its environs in the Greater Accra Region.

The 16-bed facility fitted with an out-patient department, a delivery room, labour ward, a reproductive and child health area was constructed with funding from the Infanta Malaria Prevention Foundation.

The facility also has two consulting rooms, a pharmacy, a laboratory and administrative offices to provide services to the about 30,000 people spread within the Ga South Municipality where the facility is located with about 8,500 patients expected to be attended to in its first year of operation.

The Kwame Anum Health Center will also provide lifesaving and essential services such as immunization against the 13 childhood killer diseases, maternal, child health and nutrition to community members.

In a speech to formally open the Health Centre, Mrs. Akufo-Addo said the initial idea of the Foundation, which she is a co-founder, was to rehabilitate the already existing CHPS compound but after consultation with the community and health service leaders, decided to construct a much needed health center.

She said the Foundation is a group of remarkable women who came together with a mission to support the development of women and children by paying particular attention to their health and executing Community Based Health Planning and Services (CHPS) as an important strategy especially for the prevention and treatment of malaria.

Mrs Akufo-Addo said the Foundation, has put up three CHPS compounds in Kobedi in the Sunyani West District of the Bono Region, Adenkrebi in the Ga East Municipality of the Greater Accra Region and Nyanshegu in the Sagnarigu District of the Northern Region.

The First lady, promised to continue to use both the Infanta Malaria Prevention Foundation and the Rebecca Foundation of which she is Executive Director, to assist in improving on the health of Ghanaians especially women and children.

She expressed gratitude to the Ga South Municipal Chief Executive Joseph Stephen Nyarni, the Ghana Health Service, and the Chiefs and Elders of Kwame Anum for their support throughout the execution of the project.

Present to witness the commissioning of the facility were the MCE for Ga South Stephen Nyarni, Parliamentary Candidate for the NPP, Philip E.K Doe and the Chief and leaders of Kwame Anum.