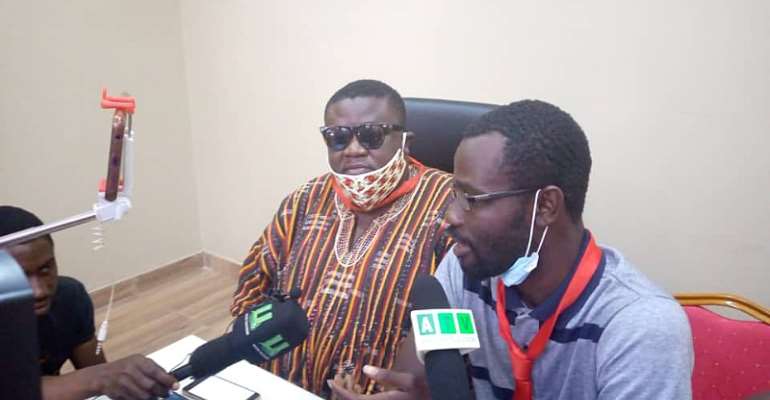 The Okyeman Youth for Development group has condemned what they describe as tribal, derogatory, and war-agitating comments from former President John Dramani Mahama on the people of Akyem.

This follows a post on the Facebook page of the flagbearer of the opponation Democratic Congress (NDC) on August 31, 2020, which described some unnamed members of the ruling government as ‘Akyem Sakawa Boys and Grandpas’.

Taking strong offense to the comment as well as other utterances by members of the NDC, the Okyeman Youth for Development has rebuked the former president as they demand an apology.

“The leadership of the Okyeman Youth For Development therefore condemn such a shared comment by the former president and as a matter of urgency demand a heart driven apology to especially the Overlords of the three Akyem States and the entire Akyem Kingdom”, a press release signed by the group convener Nana Yaw O. A Asem has said.

Another portion reads, “Okyeman youth for Development call on the former President to pull down the ethnocentric shared post and render an unqualified apology to the Overlords of Akyem thus Abuakwa, Bosome and Kotoku, the Akyem People and all well-meaning Ghanaians or else we will take the next course of action”.

INSTANT DEMAND FOR RETRACTION OF DEROGATORY POST MADE BY HIS EXCELLENCY,FMR PRESIDENT MAHAMA. - OKYEMAN YOUTH FOR DEVELOPMENT

Good morning ladies and gentlemen of the media, Ghanaians , Okyeman and friends of Okyeman worldwide.

It is rather unfortunate to have seen on the various E-networks, social media pages and especially the official Facebook page of the Former President, H.E Dramani John Mahama, certain tribal, derogatory, and war-agitating comments shared by the former president. The leadership of the Okyeman Youth For Development therefore condemn such a shared comment by the former president and as a matter of urgency demand a heart driven apology to especially the Overlords of the three Akyem States and the entire Akyem Kingdom.

In the said c shared post on his official facebook page,the statement categorically referred to Akyems in its entirety as Sakawa Boys and Mafia. Our attention has been brought to this unfortunate comment and currently, on almost all social media platforms and some media houses Akyems have been subjected to Public ridicule.

Historically, the political history of Ghana cannot be recounted without particular emphasis to the exploits made by the Akyem people. The Akyem kingdom is a great kingdom whose reputation has never been questioned and any attempt to malign the Akyem people will fiercely be resisted.

Also, It may interest H.E John Mahama to know the that the first Black ruler in sub-Sahara Africa to be conferred the Title of a "SIR, was from Akyem (Sir Nana Ofori Atta I ) an enviable title given to people with exceptional capabilities, and had proven himself to be the moving machine of national development. How can descendants of such a ruler and other many rulers whose contributions had projected Ghana to the global space be branded by the ex president as Sakawa Boys” in his shared post? This is unpresidential and H.E John Mahama should render an unqualified apology and be made to appease the spirits of the Akyem gods whose blessings have kept the kingdom till date.

We are dumbfounded because H.E John Mahama with a degree in History should not have gone that tangent. As a historian one thing common to all history scholars is that, Unity is paramount in nation building and we call for absolute eradication of tribal comments hence the need to desist from such divisive comments. Joseph Boakye Kyeretwie Danquah proud son of Akyem who is credited with the name Ghana said Tribal statement and a bite of a snake is of no difference . lets all learn from this great adage, desist from such comments and project Ghana first.

We are outraged because H.E John Dramani Mahama and his NDC have constantly made it a ritual to malign Akyem people without the slightest provocation.

Ladies and Gentlemen of the Media, let me please take you down memory lane to chronicle some unsavory comments made by NDC on the Akyem people.

In March, 2014, H.E John Dramani Mahama tagged Kyebi the traditional capital of Akyem Abuakwa as "Galamsey Headquarters" , Ahgain, the then Eastern Regional communication Director of the NDC, Baba Jamal Konneh, described the Akyems as witches who are ungrateful if they fail to vote for then President John Mahama in February, 2016. The Ashanti Regional Secretary of the NDC,Kwame Zu in September, 2019 said "until potable water was provided for the Okyenhene and his people, they drunk unwholesome water with animals". Also, in March ,2016, Bismarck Tawiah Boateng and Apau Haruna Owiredu former Regional executives of Eastern Regional NDC used unprintable words on the overlord of Akyem Abuakwa His Royal Majesty Osagyefo Amoatia Ofori Panin I which as a matter of decency cannot be re-echoed.

Before I conclude the point should be made that Akyems are peace loving people with impeccable personalities.It is not surprising that Akyem have been synonymous with education and enlightenment.

Okyeman youth for Develpoment call on the former President to pull down the ethnocentric shared post and render an unqalified apology to the Overlords of Akyem thus Abuakwa, Bosome and Kotoku, the Akyem People and all well meaning Ghanaians or else we will take the next course of action.