Mahama Provides Freebies to His Mistresses, While Akufo-Addo Provides Relief to the Poor and Vulnerable 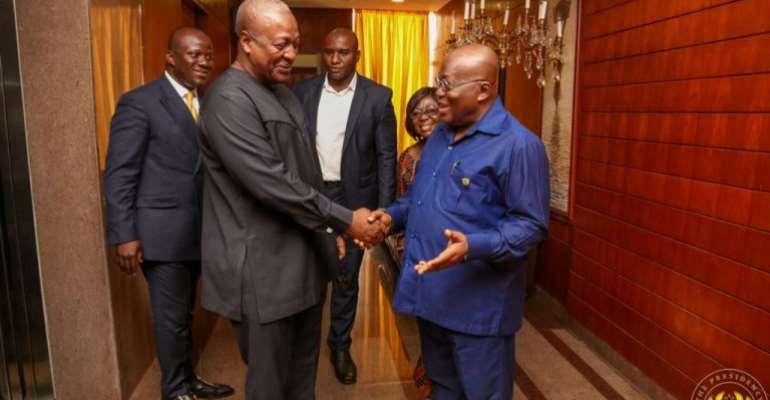 The more Mr. John Dramani Mahama bitterly complains about the relief and social intervention measures and policy initiatives being put in place by President Addo Dankwa Akufo-Addo, for the socioeconomic comfort of the most impoverished and vulnerable in Ghanaian society, the clearer it becomes to the overwhelming majority of Ghanaian citizens and eligible voters that the former President has absolutely nothing substantive or meaningful to offer to citizens and residents in dire need of significant quality-of-life measures and/or policy initiatives (See “I’m Providing ‘Critical Help’ Not Freebies – Akufo-Addo Replies Mahama” Daily Mail / Ghanaweb.com 8/17/20).

Indeed, even as one of his most ardent critics had occasion to observe recently, during the four-and-half years of the Dumsor-inflected Mahama tenure, the former Arch-Lieutenant to the late President John Evans Atta-Mills did not even attempt to ease up the acute distress of the worst impacted ordinary Ghanaian citizens by supplying the latter with such simple but essential items as flashlights, lanterns and candles, let alone a gallon of kerosene/paraffin or portable power generators. Instead, the then President Mahama would haughtily and disdainfully chide private Ghanaian business owners for woefully lacking the requisite imagination, common sense and creative initiative to suavely negotiate their work schedules around the largely unpredictable and erratic power supply.

He would also order Ghanaians to shut up and stop complaining unnecessarily because other than his presidential predecessors, namely, former Presidents Jerry John Rawlings and John Agyekum-Kufuor, none of these bitterly complaining Ghanaian citizens had ever been elected President of the Sovereign Democratic Republic of Ghana. You see, that is how insufferably arrogant this most grossly incompetent postcolonial Ghanaian leader, in the searing and memorable words of former President Jerry John Rawlings, is, on top of his criminal callousness and payola-guzzling unprecedented appetite. It is also insufferably absurd for Candidate Mahama to accuse Nana Akufo-Addo of taking undue advantage of the COVID-19 Pandemic to distribute freebies, when the former National Democratic Congress’ Member of Parliament for Gonja-West, for most of the period that he was comfortably holed up in Jubilee House, which was some 8 years, Mr. Mahama was mired neck-deep in bribery and corruption, and did absolutely nothing to improve the quality of life of the ordinary Ghanaian citizen.

What of the Jibril Kanazoe Ford Expedition Extortion Scam, the European Airbus SE Bribery Racket and the Brazil Embraer Aircraft-Purchasing Heist? When he is not busy creaming the Ghanaian taxpayer, Little Dramani, also widely alleged to be the patent owner of the giggly nickname of “Papa No,” is also widely alleged to be giving freebies by the ton to his young “slay queen” mistresses in the form of million-dollar mansions, all at the expense of the Ghanaian taxpayer. For example, Little Dramani is widely known to have bought mansions and expensive automobiles for minor political sidekicks like Madam Akua Donkor, founder of the Ghana Freedom Party (GFP), whom he has in the past also taken on several official delegations abroad, all at the expense of the Ghanaian taxpayer. This is the same politician who recently self-righteously accused President Akufo-Addo of “blowing” millions of dollars of taxpayer money on trips abroad.

On the latter count, of course, it all boils down to the critical question of “Value for Money.” In other words, which of our two protagonists could be more aptly reckoned to have more profitably spent the people’s money to successfully drum up business and the creation of jobs for the Ghanaian people? And, of course, the unmistakable answer is that it is, definitely, Ghana’s former Foreign Minister and former Minister of Justice who has done our country proud by taking Ghana back unto the pedestal of global African leadership, since the epoch-making period of President Kwame Nkrumah and his Convention People’s Party (CPP) government.

And, by the way, on the question of the indiscriminate doling out of freebies, Madam Akua Donkor has publicly gone on record as claiming that Mr. Mahama has bought her houses and automobiles. In other words, the last big-time politician who ought to be accusing his political opponent of the wasteful spending of the Ghanaian taxpayer’s money is Little Dramani. But, of course, Candidate Mahama is a stark-naked man who has absolutely no shame in his game, as it were,