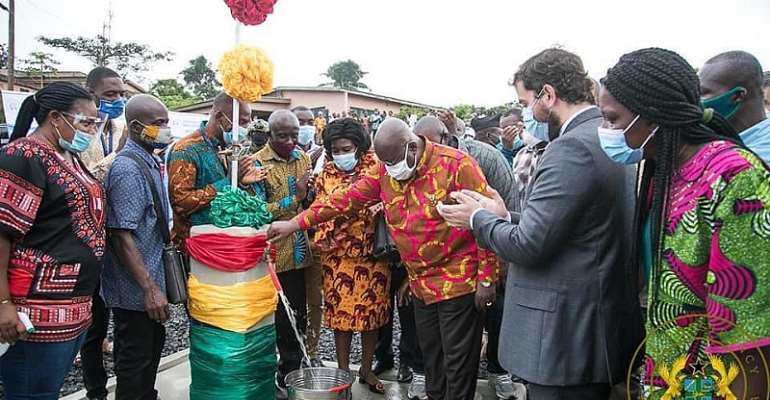 The opposition National Democratic Congress (NDC) in the Adaklu Constituency has called on the ruling NP to give credit to the Mills-Mahama government for the five-district-water project including the Adaklu District project.

The opposition party says the project was conceived by the Mills-Mahama administration which sourced funding for the projects through Strabag AG of Vienna, Austria.

This was contained in a release signed by Mr Charles Agbesi, its Constituency Secretary.

It added that the report was laid in Parliament on August 12, 2012.

The statement indicated that the loan was to finance the water supply scheme for the then Adaklu Anyigbe, North Tongu districts and Ho Municipal adding that the three districts have since attained local governance autonomy.

The release further noted that the funding for the first phase of the project, which included the building of the treatment plant, provision of pumping stations, overhead tanks among others was approved by Parliament on 20th March, 2012.

It stressed that the loan was also to fund the second phase of the project, which also comprised of the main distribution lines to designated points.

The release explained that the third phase, which was to care for distribution points in communities in some selected districts including Adaklu and Agortime/Ziope was to be funded with another additional loan of 11.5 RPT 11.5 million Euros from the same bank.

It noted that the five district water project also known as the STRABAG Project therefore remained an inherited project from the NDC and that President Akufo-Addo and his NPP-led government should not pretend to be starting a new water project.

"It is therefore misleading for another sod cutting for an ongoing project to be organised just for political expediency."

He said water is life and should be prioritised by a caring government and when such projects stalls, it should be activated at once.

He said the project has entered into the third phase and urged the NDC to praise government for securing the 11.5 Euros to complete the water project aimed to bring respite to the people in that corridor.

Mr Nyatsikor alleged that policy credibility affected the third phase under Mr John Mahama, the flagbearer of the NDC.

In a related development, Ms Cecilia Dapaah, Minister of Sanitation and Water Resources in July, this year disclosed Cabinet's approval for the start of phase three of the Five District Water Supply Scheme.

She said Parliament approved a loan facility in April, 2020 to be financed by Raiffeisenbank International if AG/Vienna for implementation of phase three.