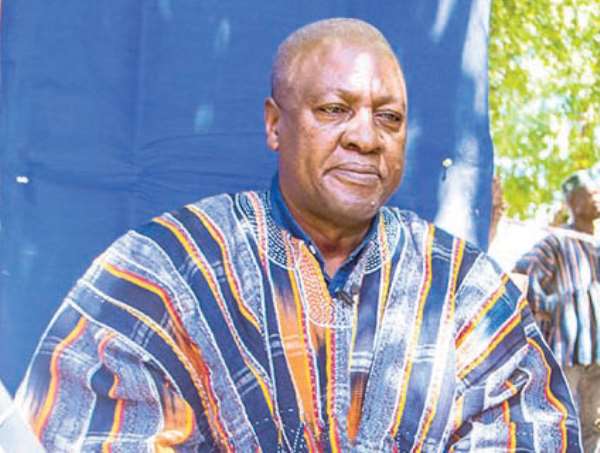 A few weeks ago, the flagbearer of the opposition National Democratic Congress (NDC) promised to do a clean campaign. We and others digested the promise with a pinch of salt because we doubted he would be able to do so.

Emerging details from his campaign tours are pointing at him comfortably sitting in the gutters of local politics passing rather dangerous remarks. He is living to his billing of a bad player as we very much thought.

The former President, as Vice-President Mahamudu Bawumia remarked recently, is an old quantity. We know him and like the leopard, he cannot change the spots of his skin. All he can do is to engage in his trademark hypocrisy and mendacity.

One thing the former President must do to reverse his unimpressive image is to convince Ghanaians that he would be truthful and decent in his choice of words when he is especially speaking about his opponents.

The NDC flagbearer is failing in his bid to convince people to come to his aisle on the political spectrum, with his poor communication skill being a causative agent. It is an ironic reality considering the fact that he is someone who studied this subject at post-graduate level. Desperation and frustration are taking a toll on him.

A campaign of invective and outright untruth are injurious to the image of a person seeking the votes of his compatriots.

His description of Vice-President Mahamudu Bawumia, a gentleman who would not go close to hurling invective at others, in uncharitable terms surprised many, including us on the Daily Guide.

Going dirty as the Daily Guide headline of yesterday put it in reference to him is something which should not be associated with someone who was at the helm of state and seeking a return. We are saddled with a John Mahama who does not keep his word even when it is about being decent for a while in his public discourses as we have observed in the past few weeks.

The prognosis is not good. The former President would insult as many people as he wishes to as part of his campaign strategy in the run-up to the December polls. But who would rein in the horse which has fled the paddock?

The Sammy Gyamfis have been shown the way to be dirty in their public discourses. When the young man started insulting people of the same age as his grandfather many wondered whether the former President was going to check him. That has not been the case because after all he is only doing the bidding of his boss, the flagbearer. How sad that another child is being trained to become a full-fledged sharp-teethed politician.

Do Ghanaians want a President who is on an insulting spree and would divide the country along ethnocentric lines?

Do we want a President for whom morality means nothing?

Do we want a President whose management of the economy when he was in charge was anything but acceptable?

Do we want a President who cannot be trusted with the public purse?

Do we want a President whose tenure was riddled with fiscal challenges which nearly pushed the country over the precipice?

Do we want a President who does not see the good in others?

Do we want a President who disregards the repercussions of remarks which are ethnocentric in tone?

With the answers to the foregone all turning negative, of course, there is no disputing the fact that our best bet as Ghanaians is to spare the country a return of a John Mahama.