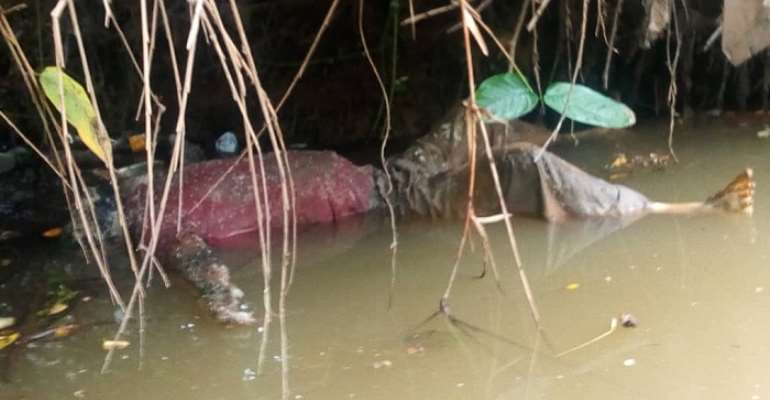 The body of the man floating in the river

The Police have started investigations into the death of a man, whose body was seen floating in the Kobri River in the Atwima Nwabiagya Municipality on Monday afternoon.

The exact identity of the deceased, who is believed to be in his late 20's, is still unknown. A certain farmer saw the body floating in the river, near the Nkawkom Junction, and raised the alarm.

However, by the time the body was retrieved it had decomposed and the face disfigured so it was difficult to identify him.

Around 1 p.m. on Monday, eyewitnesses told DAILY GUIDE that a farmer was returning from his farm when he saw a lifeless body floating in a river.

The farmer alerted others who reported the case to the police to start investigations.

A number of police personnel rushed to the Kobri River and they managed to retrieve the bloated and decomposed body from the river for assessment.

Due to the foul smell emanating from the body, it became necessary to bury it immediately.

A police source said it was too early for anybody to jump into conclusion, noting that investigations were in full force.

According to him, the police are not ruling out the possibility of someone killing the man and later on dumping the body into the river as a way to cover up.

The source said the police were also not ruling out a possible case of suicide.

W/R: Adiembra residents save 17-year-old student from kidnap...
17 minutes ago