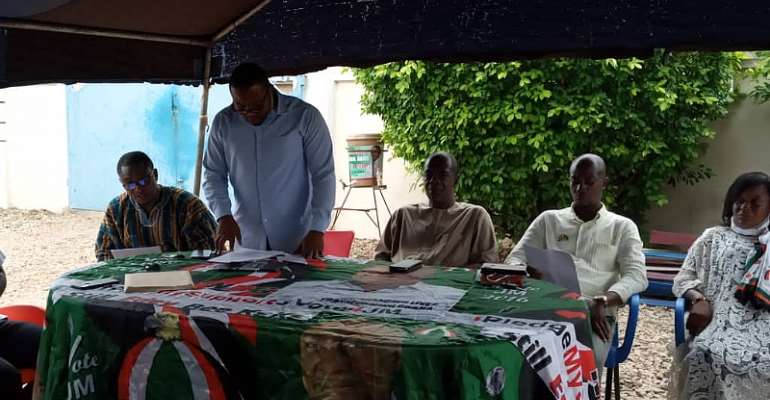 The opposition National Democratic Congress (NDC) party has announced the dismissal of Mr Kwadwo Nyame Datiakwa who has declared his intentions to contest the upcoming general elections as an independent parliamentary candidate.

Mr Kwadwo Nyame Datiakwa was appointed as the District Chief Executive (DCE) for Kintampo South in 2009 by late President John Evans Fiifi Atta Mills. Though many expressed shock to his appointment, the NDC party backed him to succeed.

Later in 2016, he contested for the parliamentary primaries of the Constituency but unfortunately suffered a landslide defeat to Hon. Felicia Adjei.

Fast forward to 2019, Kwadwo Nyame Datiakwa resurfaced after abandoning the part to contest the primaries of the NDC, seeking to revenge his lose to Hon. Felicia Adjei.

A day after the primaries, Hon Felicia Adjei who won the elections visited Hon Datiakwa to console him and use that opportunity to mend their differences and also ask for his assistance in the task ahead.

Agitated after losing for a second time, he did not buy the idea and has subsequently printed posters to confirm his decision to contest in the upcoming parliamentary elections as an independent candidate, refusing to listen to the advice of party elders.

At a press conference held by the party in the Kintampo South Constituency today, Kwadwo Nyame Datiakwa has officially been sacked from the NDC party.

“Consequently, pursuant to article 45, 8 'b' and 'c' of the party's constitution, the party has suspended Hon Datiakwa indefinitely. By this, he seizes to be a party member, he must from henceforth desist from coming into contact touch with anything of NDC since he will be doing it at his own risk”, a press release to confirm the sacking has said.

It adds “It must also be made clear that the party have contacted and advice constituency and branch executives against supporting his candidature. But if the party finds substantial evidence against any party official, he/she will be suspended also”.

Press release to all media houses...

Good morning ladies and gentlemen of the media, comrades gathered here I greet you all. I know that many of our party faithfuls present here and listening to us in their homes are of the view that, this conference has been long overdue. They are right to say so but from where I sit, this is the most convenient time to let the cat of the bag.

Ladies and gentlemen of the press, our main reason for inviting you here is basically to use your medium to reach out to the citizens of kintampo south constituency and share with them happenings in the NDC party and the resultant decisions that have been taking consequently. It is common knowledge to many in the constituency that, all has not been well between the party and it's former DCE Hon Kwadwo Nyame Datiakwa. It is also an open secret to many that, Datiakwa has declared his intention to contest the kintampo south constituency seat as independent candidate following his defeat at the Parliamentary primaries held somewhere in 2019. Even though most of you are also equally aware of the many efforts that the party have made to discourage the gentleman from choosing that path, we still owe you the responsibility of chronicling all events that have led to this moment.

Ladies and Gentlemen of the press, it all started in 2009 when His Excellency Prof John Evans Atta Mills assumed the mantle of leadership of the country and appointed Kwadwo Nyame Datiakwa as District Chief Executive for kintampo South. His appointment came as shock to many party faithfuls in the constituency owing to the fact that, he was not known in the constituency and the few people who had knowledge of his nativity asserted that, we was a member of the NPP. In fact, there were series of protests against his nomination as many feared he would one day betray the party since his loyalty was questionable. Well, some elders of the party intervened and he was eventually confirmed to the position of DCE. The party gave him maximum support and ensured that he succeeded as DCE. Due to this, he was once again appointed in 2013 to same position to serve another term with His Excellency John Dramani Mahama as president.

Fast forward to 2016, Hon Datiakwa contested the Parliamentary primaries while serving as DCE against Hon Felicia Adjei who had not had closeness with the constituents. Indeed many people anticipated a walk over for Hon Datiakwa in that election but things turned dramatic when he lost woefully with about 40% margin. Many blamed his defeat to the fact that he is hard hearted and extremely stingy even against his own party executives. This defeat however did not go down well with him and hence he deserted the party and left the winner Hon Felicia Adjei to her faith even though his support was highly expected. He was actually no where to be found in all party activities through out 2016 and 2017. But in 2018, he resurfaced and started visiting branch executives and announcing to them his intention to contest the primaries again in 2019.

Ladies and Gentlemen of the media, let me zoom straight to 2020. After Datiakwa again lost the primaries to Hon Felicia Adjei who is the incumbent MP, he started agitating. Alleging without any evidence that, the elections were rigged in favor of Hon Felicia Adjei. He petitioned the party and EC on allegation of rigging but his petition after investigation was dismissed on grounds that he had no evidence to back his claims. Apparently, he had nursed his independent candidature ambition and needed basis to proceed on. So he immediately set of and started visiting branch executives to plan the evil act with them.

Comrades gathered here and our listeners out there, it must be noted that, the accusation labeled against the party that Hon Datiakwa was promised in 2012 to be sole candidate for NDC in 2016 as condition to allow Hon Baafi go unopposed is blatant lie. The truth is, he was asked to choose between maintaining the DCE position or relinquishing it to contest Hon Baafi as parliamentary aspirant. He opted for the DCE position and that is why he was maintained for the second time. Also Hon Felicia Adjei who hails from Anyima and a faithful party person couldn't be prevented from contesting since there were no basis to prevent her. They both had the right to contest and they indeed they contested and the best candidate won. The argument that he was not treated fairly must be laid to rest henceforth.

Now let me return to the narration on the aftermath of the 2019 primaries proper. A day after the primaries, Hon Felicia Adjei who won the elections visited Hon Datiakwa to console him and use that opportunity to mend their differences and also ask for his assistance in the task ahead. To the shock of Hon Felicia, Datiakwa refused her audience. Sensing that, all was not well, she immediately informed party leadership at the constituency and regional levels. A delegation of very respected elderly people in the constituency were send to him but they made no headway since Datiakwa insisted that he was not ready to make peace with Hon Felicia. Regional chairman and his team also made uncountable number of moves to ensure peace prevails but all proved futile. Very notable chiefs were also informed of the unhealthy development in the party. They met with him and had episodes of talks with him but all fell on death ears.

It must be noted again that, in all these engagements Datiakwa was offered various mouth watering promises in the next NDC government and he declined all. When the constituency, regional executives, regional counsil of elders as well as the chiefs all failed in persuading the former DCE to rescind his decision, the national leadership of the party was brought into the picture. Deputy general Secretary of the party Comrade Otukono, The general Secretary of the party General Mosquito, Bono East minority MPs caucus, led by Dr Kwabena Donkor, The Minority leader in parliament, Hon Haruna Iddrisu and many prominent personalities all took turns to meet with Datiakwa. But he disregarded all of them and insisted on engaging in destruction of the party.

Ladies and Gentlemen, this is where we have reached! We have no available option left except to grant him his wish of leaving the party to contest as independent candidate. He has openly declared on radio stations in Kintampo that he is contesting as independent candidate. He has gone on to print his posters and they are pasted in almost every community within the constituency. He has also started going round campaigning in same direction giving us enough evidence to conclude that he really mean his decision.

Consequently, pursuant to article 45, 8 'b' and 'c' of the party's constitution, the party has suspended Hon Datiakwa indefinitely. By this, he seizes to be a party member, he must from henceforth desist from coming into contact touch with anything of NDC since he will be doing it at his own risk. It must also be made clear that, the party have contacted and advice constituency and branch executives against supporting his candidature. But if the party finds substantial evidence against any party official, he/she will be suspended also.

Ladies and Gentlemen of the media, we shall purse here and take your questions. Thank you very much for honouring our invitation.