EU top diplomat in Libya to push for peace talks 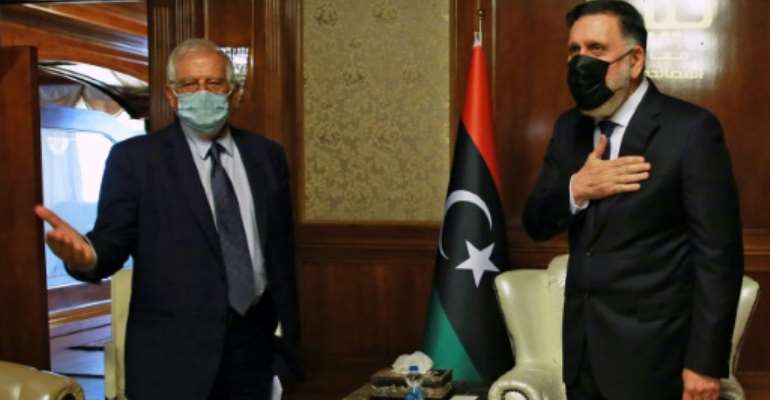 EU foreign policy chief Josep Borrell met with the head of the Tripoli-based Government of National Accord, Fayez al-Sarraj, on Tuesday. By - (AFP)

Josep Borrell met the head of the Tripoli-based Government of National Accord, Fayez al-Sarraj, whose administration recently announced a truce after months of hostilities with troops loyal to eastern strongman Khalifa Haftar.

Haftar launched an offensive to seize Tripoli in April 2019, but was beaten back this year by Turkish-backed pro-GNA forces. Fighting has stalled around the central Mediterranean port of Sirte, the gateway to Libya's eastern oil fields and export terminals.

The GNA and Aguila Saleh, speaker of the eastern-based parliament that partly backs Haftar, in late August made separate announcements that they would cease all hostilities and hold nationwide elections, drawing praise from world powers.

He was referring to a January summit in the German capital where the main countries involved in the Libyan conflict agreed to respect an arms embargo and to stop interfering in Libya's domestic affairs.

Borrell said he had also discussed ways "to advance (the) political process", revive joint military talks between the two sides and to lift an oil blockade imposed since January by pro-Haftar groups demanding a fair share of hydrocarbon revenues.

According to comments released after the meeting, Di Maio called Libya "a crucial crossroads for building a new model" of development in the Mediterranean, while Sarraj voiced interest in Italian firms investing "to support Libya's development and growth".

Di Maio previously met with Sarraj in late June, promising that a Mediterranean naval operation to enforce the arms embargo would be effective.

EU diplomat Borrell later on Tuesday met the head of the National Oil Corporation Mustafa Sanalla, and tweeted that they had discussed the "need to ensure that oil production can resume, for the benefit of all Libyans and for the unity and prosperity of #Libya."

Haftar last month authorised a partial lifting of the months-long blockade of oil terminals to help ease power cuts in the east, according to a military official loyal to him.

The north African country, which sits on the continent's biggest crude reserves, has been mired in a complex web of conflicts since the 2011 NATO-backed uprising that toppled and later killed longtime dictator Moamer Kadhafi.

Haftar is supported by Egypt and the United Arab Emirates as well as Russia, while the GNA is backed by Turkey and Qatar.

LGBTQ+ Bill: You're shameful backward thinker obsessed with ...
44 minutes ago