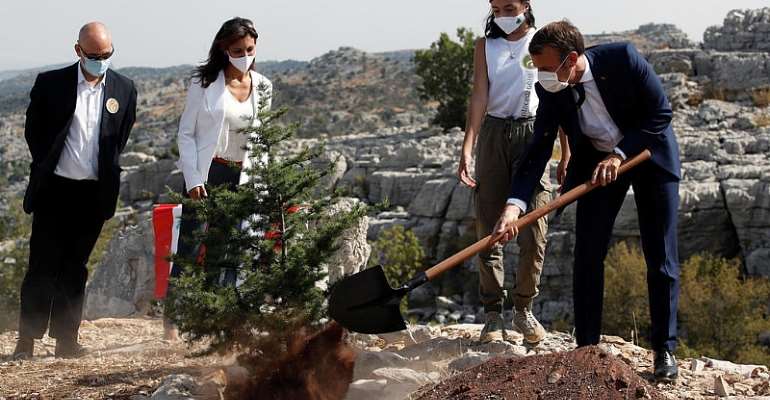 French President Emmanuel Macron on Tuesday staked his political capital on ambitious reform in Lebanon on his second visit since last month's catastrophic blast, as the country marked 100 years since its creation on the brink of collapse.

One hundred years after the creation of Lebanon under a French mandate, President Emmanuel Macron marked the centenary on Tuesday by planting a cedar tree in a forest north of Beirut, still reeling from a massive blast that has left thousands dead or injured.

The coniferous plant--the nation's emblem—was joined by other powerful symbols as the French air force painted Lebanon's skies in red, white and green smoke—the colours of the country's flag.

Few however, were in the mood to celebrate.
"Seriously, we have more pressuring issues to worry about and Lebanese really don't want to be celebrating,” wrote journalist Luna Safwan on Twitter.

Clichés and neocolonialism
Safwan and other observers also poured scorn on the French president's visit on Monday to Fairouz, the Arab world' most famous singer, seen as a unifying figure in a country plagued by conflict.

Political satirist Nadim Koteich wrote that the Fairouz visit and the Cedar tree planting were an unwelcome “cliche.”

Macron has also had to brush off claims of neocolonialism, reignited by the timing of his visit to Beirut--the second in a month-- which coincides with the declaration of Lebanese nationhood and the beginning of French rule.

Macron's defenders, however, including Beirut residents enraged at their own leaders, have praised him for visiting the devastated streets of the capital when no Lebanese official did.

Upon his arrival on Monday, Macron said his position towards the country's political establishment "is unchanged: demanding without interfering".

Taking a gamble
He has stressed the need for an overhaul of the complex sectarian political system, while striving not to be seen as a meddler in the former French colony.

Macron was due to hold difficult discussions on Tuesday with representatives of the country's top nine political blocs in the second such talks since the 4 August blast.

Prior to his visit, the French leader admitted in an interview that his brokering drive was a gamble.

"It's a risky bet I'm making, I am aware of it... I am putting the only thing I have on the table: my political capital," he told Politico magazine.

Forming a government
But the 48-year-old diplomat, little known to the public before he emerged abruptly as a consensus candidate, has already been rejected by activists.

They fear he will be held hostage to a system of corrupt leaders, widely blamed for the explosion in Beirut, which was caused by a stockpile of ammonium nitrate fertiliser that had languished in the port for years.

Public anger swept away the last government of Prime Minister Hassan Diab and Macron has called for the formation of a "mission government" to spearhead much needed reforms.

Donor conference in France
France and the international community have said they will not provide financial assistance to Lebanon unless it tackles widespread corruption.

New Prime Minister Adib, a dual Lebanese-French citizen, has vowed to work on reaching a bailout deal with the International Monetary Fund.

Speaking to reporters, Macron said France was ready to host an international conference on how to help Lebanon in mid-October, calling the next six weeks "crucial" for the country's future.