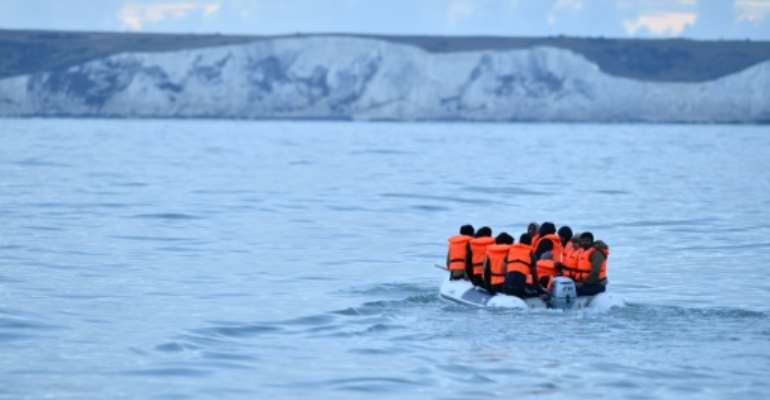 Nearly 1,500 migrants and asylum seekers arrived in Britain by small boats in August, according to an analysis by the domestic Press Association news agency.. By Glyn KIRK (AFP)

As dawn broke Tuesday over the Channel, a small black dot on the horizon slowly morphed into an increasingly familiar sight: a dinghy overloaded with people desperate to reach Britain.

Those aboard, all wearing orange life jackets and including at least one woman and a child, were among dozens to attempt the crossing overnight as several days of bad weather receded.

"This year, every calm day it's been pandemonium," said Matt Coker, the skipper of "Portia", a 11-metre (36-foot) boat chartered by AFP to see the situation in the Straits of Dover up close.

Coker, 40, is from a family of sailors and has 22 years' experience sailing across the world's busiest shipping lane.

"You never used to see migrants until three or four years ago," he said as a huge container ship disappeared into the distance.

Coker was the first to spot the overcrowded single-motor white dinghy, 4.5 nautical miles (just over five miles, eight kilometres) from the Dover coastline while the Border Force was busy intercepting two other small boats nearby.

As he approached, he ran through a now-familiar procedure of radioing the UK coastguard with the precise location and number of people aboard.

A military-style drone was soon mobilised and a UK Border Force vessel then chugged into view to take the dozen or so migrants off the dangerous inflatable craft and into the port of Dover.

The group, who appeared to be from the Middle East, did not respond to questions about where they came from.

It wasn't long before Coker spotted another black dot on the horizon through his binoculars.

After motoring to within a mile of the maritime border between Britain and France -- and with a French coastguard vessel in sight -- another dinghy with five men aboard floated into view.

Britain's navy has recently deployed personnel and aircraft in an attempt to deter Channel crossings. By Glyn KIRK (AFP)

The small black craft's motor sputtered to a stop as the five men, who said they were from Sudan, waved and gave thumbs up signs.

They were dressed in shorts and hooded sweatshirts -- one emblazoned with "Bath University" on the front. None wore life jackets and they had no drinking water on board.

The group said they had made several attempts to reach Britain, and had been on the water for around eight hours on this occasion.

"Three times we tried, but we never succeeded," one of the men said, as another dangled his leg over the inflatable into the grey water.

"We're OK," he added, thanking Coker when he informed them that the British coastguard had been notified.

Nearly 1,500 migrants and asylum seekers arrived in Britain by small boats in August, according to an analysis by the domestic Press Association news agency.

Signs of these perilous journeys are visible in Dover's marina, where dozens of dinghies bob on the water in disused corners.

August's tally of arrivals is believed to be a record for a single month and is almost as much as the numbers in June and July combined.

It has increased political tensions between London and Paris, with Britain's right-wing Conservative government publicly pressuring France to do more to stem the flow of migrant crossings.

Prime Minister Boris Johnson's spokesman said Tuesday the spike in crossings was "unacceptable" and blamed criminal gangs for exploiting the desperate and vulnerable for money.

"France is a safe country with a well-run asylum system and it's a long-standing principle that people can and should claim asylum in the first safe country that they enter," the spokesman said.

French authorities insist they are doing all they can, while the mayor of the port city of Calais told Johnson he should "calm down" last month.

Interior minister Priti Patel, who has vowed to make the journeys "unviable", met her French counterpart Gerald Darmanin in July and agreed to create a joint police intelligence unit to combat migrant traffickers.

Britain's navy recently deployed personnel and aircraft, but the signs Tuesday were the latest steps were yet to be a deterrent.

Coker estimated that at least 12 to 15 small boats had been intercepted in the first few hours, based on his reconnaissance and coastguard radio transmissions.

"The people coming now want to be found and processed," he said.

The French authorities also appeared to do little to stop the dinghies once they have set sail, he added.

"They're a different sort of migrant to in the past," he added, recalling those coming previously often hoped to evade officials and make it to the British coastline for pre-arranged pick-ups.