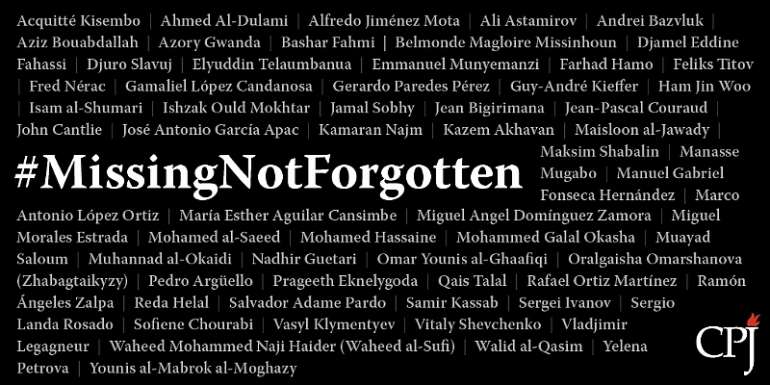 A lack of accountability in the cases of journalists who disappear is chilling for press freedom and devastating for the journalists’ families, the Committee to Protect Journalists said today in launching the #MissingNotForgotten campaign .

Marking the International Day of the Disappeared yesterday, CPJ launched the campaign to pressure authorities to investigate the cases of at least 64 journalists missing globally, particularly those who have disappeared in Iraq, Syria, and Lebanon during years of regional conflict – nearly one-third of the global total.

An interactive map features journalists who went missing in the Middle East, and each day of the 19-day campaign, CPJ will feature one of their stories . First to be featured is Samir Kassab , a Lebanese photographer who vanished in 2013 while reporting in the Syrian city of Aleppo. CPJ published a video interview with Kassab’s siblings who describe how he was a role model.

“The #MissingNotForgotten campaign will shine a light on brave journalists like Samir Kassab and pressure authorities with the power to investigate, because their families have a right to the truth,” said Courtney Radsch, CPJ’s advocacy director. “Journalists’ disappearances result in important stories going untold. And by leaving so many questions unanswered, governments send a clear message to the working press that they too can be silenced.”

Persistent violent conflict is not the only backdrop for journalists’ disappearances. In November 2017, journalist Azory Gwanda disappeared while working in rural Tanzania. Haitian freelance photojournalist Vladjimir Legagneur was last seen by his wife on March 14, 2018, when he left their home in the capital of Port-au-Prince. Authorities have failed to complete credible investigations into either journalists’ fate.

CPJ has consistently called for investigations into these disappearances, including at the United Nations and during international missions. CPJ Emergencies provides safety advice and assists journalists in distress, recently helping around 60 Syrian journalists and their families escape dangerous conditions and resettle in Europe.