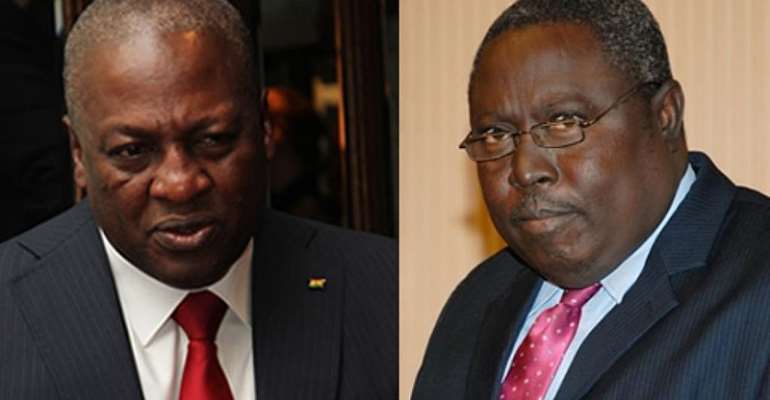 The kleptocratic politician and former President who is widely suspected to be the patented owner of the nickname “Papa No” in that recently released hit song, may have so soon and conveniently forgotten that not very long ago, shortly after Mr. Martin ABK Amidu was expelled from the Atta-Mills’ cabinet as Attorney-General and Minister of Justice, the then Vice-President John Dramani Mahama put up absolutely no fight in defense of the vindictively expelled and humiliated former Presidential Running-Mate of the man who so inexcusably humiliated the longest-serving Deputy Attorney-General and Deputy Minister of Justice in Ghana’s postcolonial history.

Back then, shortly after Mr. Mahama giddily assumed the reins of governance as Interim-President of the Sovereign Democratic Republic of Ghana, “the very first postcolonial-born Ghanaian citizen ever to have done so,” in the wake of the “mysterious” passing of President John Evans Atta-Mills, Mr. Mahama crudely and luridly resorted to the characteristic intimidation tactics that the founding-father of his party, the National Democratic Congress (NDC), namely, former President Jerry John Rawlings, invented and perfected into an enviable political art as both Chairman of the defunct junta of the Provisional National Defense Council (PNDC) and, presently, the faux democratic National Democratic Congress.

Back then, shortly after the now-Candidate John “Airbus-Kanazoe” Mahama assumed the reins of governance as Interim-President, Mr. Amidu wrote and published a series of articles on several Ghanaian media websites in which the recently dismissed Attorney-General and Minister of Justice clearly indicated that his life was in danger by operatives inside the Mahama regime. So, it is rather absurd for the now-Candidate Mahama to be pretending that the Akufo-Addo-appointed Independent Special Prosecutor was the best thing that happened in the battle against official corruption. If, indeed, former President Mahama regarded Mr. Amidu as “an Energetic” candidate for recruitment into the battle against official corruption, then the logical question becomes: Why had not the then President Mahama appointed Mr. Amidu as his corruption-fighting Czar?

The fact of the matter is that even as President, Mr. Mahama had absolutely no interest in fighting corruption, which was why his government was hit by a seismic wave of corruption scandals more than any other government in Ghana’s Fourth Republic. Mr. Mahama still maintains the record of the most corrupt President of Ghana’s Fourth Republic, in the playbook of Chairman Jerry John Rawlings – what of GYEEDA, SUBAH, SADA, NSS (the National Service Secretariat ghost payroll scandal involving the humongous sum of GHȻ 8 Million), Bus Branding, Brochuregate and the 2014 Brazil Fiasco? The list goes on and on and on ad infinitum. Then also, why hadn’t the then President Mahama not returned the current Special Prosecutor to his old job as Attorney-General, if, indeed, Mr. Mahama found Mr. Amidu to be so “energetic” and perfectly cut out for the critical job of fighting corruption in the country?

Which, by the way, the now-Candidate John Dramani Mahama may be dead-on-target about, as the then Attorney-General Amidu had been summarily expelled from the Mills-Mahama cabinet for adamantly insisting on retrieving the Alfred Agbesi Woyome Loot of GHȻ 51.2 Million, which the convicted but unsentenced or rather, the custodially uncommitted, mega-thief credibly claims to have divvied up among the front-row leadership of the National Democratic Congress. In other words, Candidate Mahama is the last big-time Ghanaian politician who ought to be railing against President Addo Dankwa Akufo-Addo for supposedly losing the corruption fight. You see, Dear Reader, as President for an unprecedented four-and-half years, Mr. Mahama never even pretended to be fighting official corruption in the country.

The “Ganger Boy” was actually neck-deep mired in corruption. For example, at least 8 of the Mahama cabinet appointees were found to have been criminally collecting double salaries during the four-and-half years that the European Airbus Scam-Artist was the Chief Resident of Jubilee House. Ironically, it is on the preceding count that Mr. Mahama’s criticism of his successor may be deemed to have a little bite. You see, if Nana Akufo-Addo had rigorously prosecuted the double-salary scamming Mahama cabinet operatives, the first corruption-index assessment of his government would not have witnessed the latter plunge a couple of notches down the rungs. But, of course, we also vividly recall the sort of pathetic acrobatic roadshow put up by a caught-with-his-pants-down Mr. Haruna Iddrisu, the NDC’s Parliamentary Minority Leader, who now behaves, self-righteously, as if he had the economic security and interest of our beloved nation at heart.