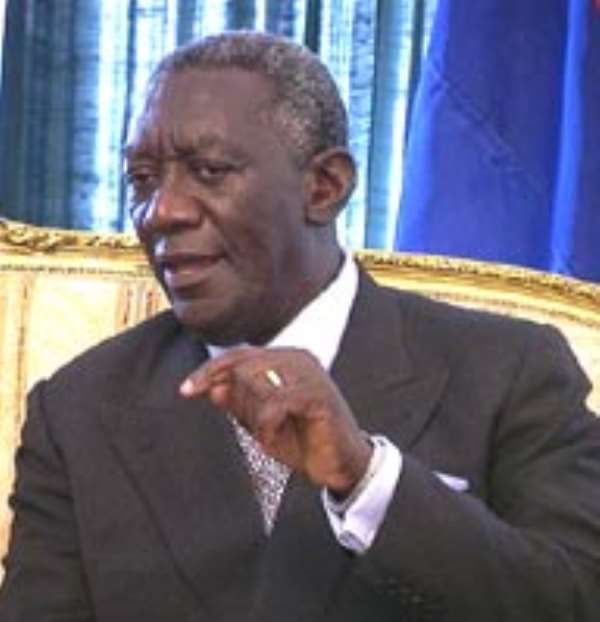 President John Agyekum Kufuor on Thursday said the Government's decision to move the Osagyefo Electricity Barge from Effasu-Mangyea in the Western Region to Tema was in the best interest of the nation.

"Government was motivated by the highest considerations in the national interest. It was driven by necessity to take the decision and not by any ulterior motive", he stated, at a meeting with the Chiefs from Nzemaman at the Castle, Osu.

This comes amidst the expression of misgivings and protestations from the people in the area against the movement of the barge which is capable of producing 110 megawatts of electricity using gas.

The President for the first time ever, had his entire Cabinet present at this meeting with the Chiefs.

President Kufuor explained that the country was facing serious energy problems as the water level in the Volta Lake had gone down and some difficulties were being encountered with the supply of power from Cote d'Ivoire.

He said it had, therefore, become necessary to put the power Barge that had been sitting idle for more than four years to immediate use to get the needed amount of energy to run the economy.

Built in Italy with a Japanese loan of 110 million dollars, it sat at an Italian Port for two years, attracting a fee of 10 million dollars before being moved down to the Sekondi Naval Base, where it remained for another two years because the Effasu Port, its previous final destination was silted up.

President Kufuor said the expectation was that they were going to find gas to fuel the barge at Effasu but now the indications were that the earliest time this could happen would be in about 30 months.

He said what this meant was that for close to about seven years the plant would have to sit as a white elephant.

He said at Tema, the barge could be readily connected to the gas pipeline, which was on the shores of the country from Nigeria.

President Kufuor, therefore, called for calm among the people, telling them to trust that the Government would not act with impunity.

"We expect the chiefs and people to appreciate the situation. The Government means very well for that part of the country. We would show good faith with you."

He told the chiefs that the Effasu Port would be transformed into a Fishing Harbour and that other interventions would also be introduced in the area to create employment for the people.

Awulae Annor Adjei III, Omanhene of Western Nzema Traditional Area and President of the Nzemaman Council, said they would not want to stand in the way of the re-location of the power barge, as the national interest should override sectional interest.

He said, it was, however, fair and within their right as Ghanaians to demand that their part of the country was given its share of development.

The Chief, therefore, called on the Government to ensure that social services including abandoned road and electrification projects were completed.

Besides, he asked for the payment of compensation to those whose coconut farms were cut down to make way for the movement of the barge to Effasu as well as extend assistance to farmers to replant the lost coconut plantations.

These, he said, were necessary to help to take off the heat on the traditional leaders, who were drawing all the flak from the youth.

Their people are accusing them of being ineffective.

Mr Joseph Kofi Adda, the Energy Minister, had on Tuesday met the Chiefs and people of the area to explain the decision to move the barge to Tema to them.

Mr Adda said after a careful study of the energy situation over a period, the benefits of moving the barge to Tema, the industrial hub of the country out-weighed the cost.

He was speaking at a forum organized at Effasu-Mangyea to officially inform the chiefs and people of the decision and to explain to them the need for the removal of the Barge, whose installation had been so dear to the hearts of the people of the area.

Mr Adda said the moving of the barge, which would cost about 50 million dollars, would begin earliest by November, 2006 or latest in February 2007.

It is envisaged that after its installation, the barge would begin to produce electricity by August 2007 to augment power generation from the Akosombo Hydro Electricity Power Station that had been dwindling following the low level of water in the Volta Lake.

Mr Adda announced a 20 billion cedis package for the provision of electricity and potable water; health, schools and road and other facilities to enhance poverty reduction and creation of employment.

He advised the people to form a taskforce to plan how the money would be utilized.

The Minister explained that until the next three years when the Tano Basin begins to produce gas to fire the Osagyefo Barge the facility would continue to be idle while the country grappled with problems to supply enough electricity for industry and domestic consumption.

It was for this reason that the barge is being removed to Tema where it could be put to use from the supply of gas from the West Africa Pipeline Project.

Mr Adda spoke about plans to expand the Aboadze Thermal Plant, the beginning of the Bui Dam Project next year and also plans to build 16 small dams to produce hydro-electricity across the country.

He said there were plans to guarantee sustainable electricity supply for the country, adding that constant supply from Cote d'Ivoire could not be guaranteed because that country was grappling with its own problems, while water in the Akosombo Dam continued to fluctuate to affect electricity generation.

The Osagyefo Barge could be replaced with a more sophisticated facility in the near future, he said.

Mr Adda described the move by some people to stand against the relocation of the barge as political and said the decision was in the best interest of the country and appealed to the people of Effasu-Mangyea not to politicise the issue.

Even though VALCO had become a strategic national asset to propel the economy to new heights, the decision to relocate the barge was not informed by the Company's operations.

"I sincerely appeal to you to bear with the Government to do what is right and in the interest of the entire nation."

Mr Stephen Asamoah-Boateng, Minister of Local Government, Rural Development and Environment, advised the people to ignore those who had been trying to politicise the decision, which he said was in the best interest of the country.

The news did not go down well with some of the people at the forum, who were visibly angry at the decision.

Rumours of the intention of the Government to remove the barge had been going round for sometime now and this had raised tension particularly among the youth, who see the project as their economic salvation when it becomes operational.

Awulae Annor Adjaye III, Omanhene of Western Nzema, who presided, announced that a 12-member special delegation from the area would meet President John Agyekum Kufuor on the issue at the Castle, Osu, Accra on Thursday.