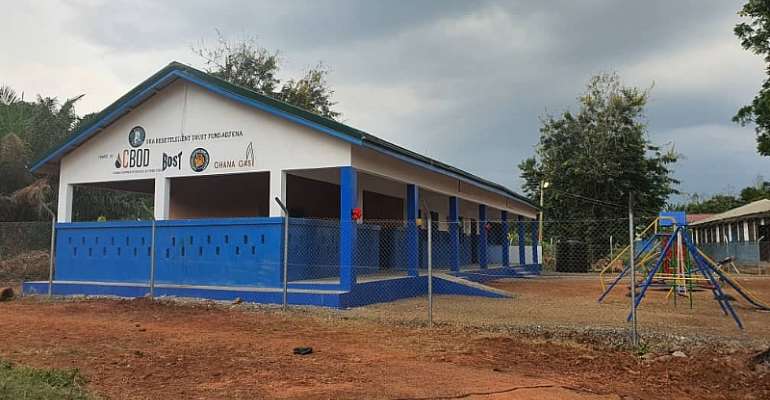 The Chamber of Bulk Oil Distributors (CBOD), the National Petroleum Authority (NPA), Bulk Oil Storage & Transportation Company (BOST) and Ghana Gas joined heads to sponsor the construction of a two-unit Kindergarten school block for the people of New Adjena in the Asuogyaman District of the Eastern Region.

The school block project including an auxiliary unit was commissioned by the Volta River Authority Resettlement Trust Fund on Thursday, August 27, 2020.

The VRA is required to provide the Trust Fund with an annual grant for developmental project for tens of resettlement townships surrounding.

Executive Director of the VRA Trust Fund Richard Twum Barimah said the Fund sought external help due to budgetary constraints in order to complete the all-important project for the people of New Adjena, particularly school children.

“VRA Trust fund at a retreat in Ho pleaded with some of the sister orgnaisations to assist us since our grant is a bit overstretched.”

He commended the Chief Executive Officer (CEO) of CBOD Senyo Hosi for making the first pledge and pulling along other donors to raise about GHS150,000, a part of which went into the school block.

The Deputy Minister of Energy (Power) William Owireku Aidoo in his address asked that the people of Adjena them to be hopeful of more projects in the future.

“President Akufo-Addo has promised he will do whatever it takes to take the Trust Fund out of financial difficulties so it can be more beneficial to the community. It is our prayer that in future university education will be free]and these children would also benefit.”

The chairman of the commissioning ceremony, the Chief of Akwamu Adumasa, Nana Ansah Kwao IV in his brief remarks thanked all the sponsors for their support. He charged the VRA Trust Fund to take up more developmental projects for the township.

The VRA Resettlement Trust Fund was set up in 1996 to cater for the needs of resettlement communities which had been affected by the formation of the Volta Lake as part of the Akosombo hydro-electric power project through displacements, poor roads and drainage and low incomes of inhabitants.