Excerpts From The NPP Manifesto 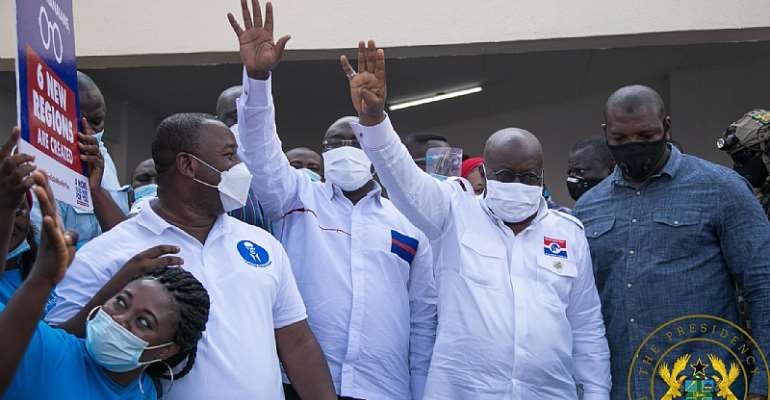 The visions of Presidential Candidates are collated and presented in a manifesto. It is a document that outlines the visions of a prospective President. In many civilized democracies, the manifesto and its items allure people to cast their votes for a particular party. The manifesto of the New Patriotic Party for the 2020 general elections have items that tackle issues affecting some key sectors of the economy.

Some aspects of the document will attract the interest of people within the middle class. These people have the penchant to cast their votes for the party with the best vision and policies. The other groups do not care much about the policies of the parties as they have the prejudice to voting for a party based on; the love for the Presidential Candidate, his or her eloquence, academic qualifications of the candidate and many other factors.

The manifesto is a composite document covering several sectors and sub-sectors. This article discusses some excerpts from it with keen interest in putting the selected items into an analytical periscope. The issues below as discussed are some examined excerpts from the manifesto:

Good governance: in 2016, the election of MMDCEs was a major promise but the government failed to deliver it. In the 2020 manifesto, the party and its Presidential Candidate rehashed the same item, promising to make such an election partisan. It will be particularly difficult to achieve such a goal. In fact, the election of MMDCEs is possible without it taking a partisan form. Making it partisan will be rejected by the populace.

The structure of governance at the grassroots needs to be transformed. This transformation does not need the participation of political parties at the grassroots. Amending Article 55(3) is not plausible. The election of MMDCEs can be done effortlessly by amending Article 243. A future attempt to seek the endorsement of an amendment of Article 55(3) from the populace will fail.

I suggested, in some of my articles, the amendment of Article 243 to allow for the election of MMDCEs without taking a partisan form. Such an amendment does not require a referendum. Parliament should be given the right backing to amend Article 243 alone to make the process less laborious.

Industrialisation failed in the past because it was state-led. From the manifesto, it is reported that some of the factories are state-led. The government should strive to achieve efficiency and reduce any possible opportunities for corruption. The challenges of principal-agent problems, poor investment decisions occasioned by poor feasibility studies, corruption and political motivation are the limitations for state-led enterprises. The policy should be evaluated to identify possible challenges that will affect its continuous pursuit.

The promise of producing at least half of the sugar, rice and chicken imports in the next term of the government needs aggressive policy interest to achieve such a goal. Komenda Sugar Factory is believed to have been privatized. How does the government plan to achieve the reduction in the sugar import of the country? The successful reduction in the imports of sugar, rice and chicken will help reduce the demand for foreign currencies, which will impact positively on the depreciation of the local currency.

The desire to produce half of the amount of imports of rice and chicken can be attained. There are numerous pieces of land in the country that can be converted into rice farms. Import lobbyists should be persuaded to invest heavily in the local production of rice. The use of import quotas and strict regulations by adhering to the rules guiding import will help in achieving such a feat. A similar policy can be rolled out in the production of chicken. The solution to attain such a goal is political will.

Education: the Free Senior High School programme needs to be maintained by reviewing some aspects of it. The policy should target the training of people with adequate skills to lead in the future and contribute meaningfully to the development of the economy. Students who do not perform well in the arts and sciences should be migrated to the skills training programmes to groom them for entrepreneurial ventures.

Accessing student loans without guarantors is great but the solution for solving the problems of poor people lies in timely payment of the loan funds. Many students who rely on student loans to pay their fees rather have them late. The sources of the funds to the Student Loan Trust Fund have been affected. How does the government intend to increase the funds allocated to the Trust Fund?

The government equally needs to have policies that are skewed towards the training of persons in the sciences. The students pursuing applied science programmes must be given special attention and support. The introduction of the STEM programme must be intensified and pursued vigorously.

Under agriculture, post-harvest losses and solving supply chain issues should be drawn and implemented. Total agricultural output and productivity should be substantially increased in a manner that will directly benefit the average small farmer and transform into high productivity commercial enterprise.

There is a need to increase agricultural productivity to meet the demands of an industrial economy. Everything about agriculture needs rethinking. Proper plans for developing commercial farms, reducing post-harvest losses and solving supply chain issues should be established.

Financial sector: this sector is key to the development of the economy. Its activities affect all the other sectors. The institutions in the financial sector should be “policed” vigilantly. Any failure in the sector in the coming years will put much burden on the economy and its people.

Currently, the government is paying huge sums as a bailout for the corporate fiascos in the sector. The development and running of Ponzi Schemes in the country, that are used as a means to accumulate wealth by some individuals, should be checked.

The state has the power to allow or plug such schemes in their budding stages. The havocs of those schemes are great, which render many jobless and cause them to experience extreme poverty in the end. The past experiences should be a warning to the investors and the state regulator.

Economy: macroeconomic stability has much impact on the other sectors of the economy. Activities that will stimulate the economy to spur growth should target the agricultural and industrial sectors. Manufacturing and other processing units must be supported to thrive and have deeper impacts. The industrialisation agenda must be pursued with care by evaluating properly, the impacts of the firms in that sector.

The manifesto items have promising outcomes if properly executed. In light of this, the party should involve stakeholders in the various sectors to nurture appropriate activities that will lead to the realization of the goals set in it. There are issues with regard to the election of MMDCEs. The party needs to search for a popular system in trying to modernize politics and democracy at the grassroots.