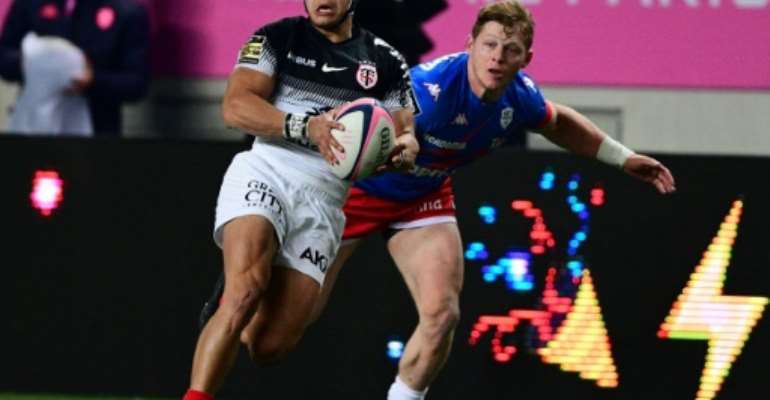 Cheslin Kolbe has scored 20 tries for Toulouse since joining in 2017. By MARTIN BUREAU (AFP/File)

The Springboks' Rugby World Cup winner Cheslin Kolbe said on Monday he wants to be a part of next year's "incredible" British and Irish Lions tour to South Africa.

Kolbe, 26, is set to feature as the visitors return to the rainbow nation for the first time since the hosts' series victory 12 years ago.

"I watched in 2009 and ever since I told myself I definitely want to be a part of that," he said during a press conference.

"Seeing the atmosphere, the way the stadiums were packed, the amount of time (that) is invested when the British and Irish Lions do come over, it's incredible. It's a team I want to be a part of and play in those three Tests."

The Toulouse three-quarter, who won an Olympic Sevens bronze medal in 2016, was forced to choose between featuring at next year's Tokyo Games, which have been rescheduled due to the coronavirus pandemic, or facing Warren Gatland's men.

"It was a difficult one with the Lions being at the same time. Being a part of the Olympics in 2016 and experiencing that was incredible," he said.

"Playing against athletes from all over the world and meeting athletes in the Olympic village are the things you want to be a part of," he added.

Kolbe was a teenager when the world champions beat the Lions 2-1 and has a clear memory from the second Test in Pretoria.

"Morne Steyn, playing at Loftus, so he knew the stadium, getting that penalty from past the halfway line," he said.

"The moment with all the green jerseys standing up and they went crazy for the winning points. That was one of the highlights.

Cheslin Kolbe has played 14 Tests since his South Africa debut in 2018. By Odd ANDERSEN (AFP/File)

Ahead of the tour, which runs from July 3-August 7, Kolbe is expected to feature for the Boks during The Rugby Championship later this year, so will be unavailable for the 2019 Top 14 winners for more than a month.

Kolbe called on domestic leagues and national unions to work together to create a calendar which will decrease clashes.

"If internationals do come up you have to be available to your national team, but the clubs should have an understanding in terms of when and how they need the players so players can plan," he said.

"It's definitely difficult for clubs to lose players due to internationals but it also gives an opportunity for players to perform at the national stage."