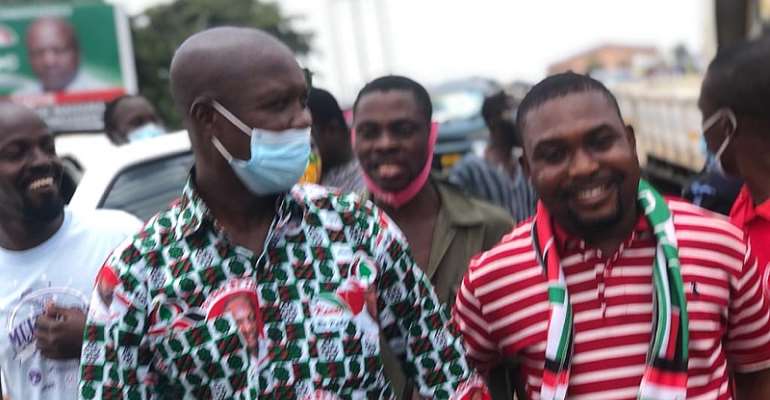 The Akatsi South Constituency Office of the opposition National Democratic Congress (NDC) in the Volta Region has inaugurated an 18 -member campaign team for the Crucial December 7th general election yesterday in a short ceremony.

Mr. George Loh, the Volta Regional Vice Chairman of the Opposition NDC, who inaugurated the team, advised members to take the upcoming elections seriously and be vigilant in order not to fall into the trap of detractors who would sway them from their main objective.

“Your main objective is to ensure former President John Mahama wins the presidential polls and nothing should detract you from that,” he emphasized.

He also tasked them to be more united to carry out vigorous campaigns to ensure that Lawyer Bernard Ahiafor, the incumbent Member of Parliament, retained the seat for the Party in the December 7th election.

The lawmaker for Akatsi South Constituency, Mr. Bernard Ahiafor, in his welcoming address, pleaded with the team to show total commitment to their mandate and promised to work with them to ensure that they achieved the ultimate goal of returning the NDC into power in 2021.

We have one NDC and I advise we all bury all our differences and carry out the duty of bringing Mahama and the NDC back to power.

We can not win this election accidentally but with endurance, commitment, and determination, he added.

The party's scribe in the Akatsi South Constituency, Mr. Daniel Dagba implored the colleague members of the campaign team to discharge their mandate diligently in spearheading the party’s campaign in the Constituency in order to vindicate the confidence that had been reposed in them by the leadership of the opposition NDC.

Mr. Daniel Dagba, The administrator of the Akatsi South NDC who spoke on behalf of the team, assured the party that the team would work relentlessly to secure unquestionable victory for former President John Dramani Mahama and the Parliamentary Candidate (PC) of the NDC in the Akatsi South Constituency.

He again seized the opportunity to call on the supporters and sympathizers of the NDC to be more United towards the rescue mission agenda.

The Communications officer of the party, Hon. John Kobby Agbanavor who issued a statement regarding the formation of the "VICTORY CAMPAIGN TEAM" also appealed to the members of the party and the Ghanaian people, in general, to continue to repose their confidence in the NDC, which, according to him, is the only party in Ghana that is able to deliver prosperity, Peace, and development to the Ghanaian people.

Members of the team include

Other members are as follows