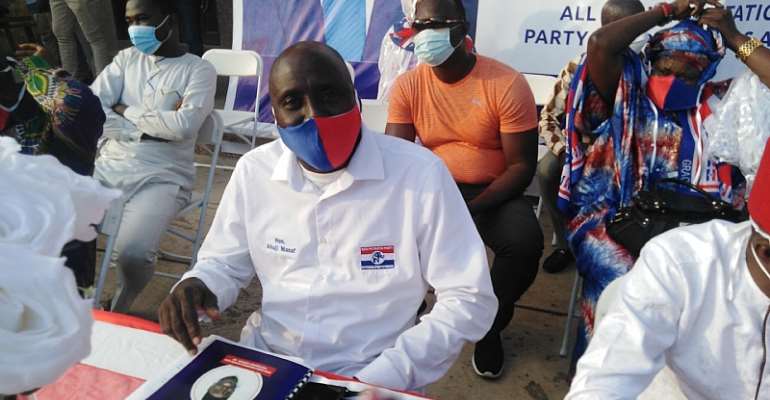 The ruling New Patriotic Party (NPP) in the Ayawaso North Constituency has inaugurated its campaign team for 2020 general elections.

The Campaign Team was tasked to work hard to canvass more support and snatch the Constituency seat from the opposition National Democratic Congress (NDC).

"There is work to do than the position to occupy and therefore let's wake up from our slumbers and work diligently to win both presidential and parliamentary elections for the NPP in the constituency," he stated.

Mr Prince Obeng encourages the team to work in unison since it is a critical component of political campaign than in division.

He was hopeful that the NPP in Ayawaso North will do whatever it takes to retain Akufo-Addo and also bring in Alhaji Manaf as the next MP for the area.

"We are now moving into full gear to campaign vigorously for victory 2020. We must not let any stone unturned. The Regional Organiser therefore challenged them to do massive house to house and ghetto to ghetto campaign for the party in the Constituency," he intimated.

Mr Prince Obeng challenged the campaign team to ensure the party wins more than 35,000 votes in the Constituency as against 14,000 in 2016.

On his part, the NPP Parliamentary Candidate (PC) for Ayawaso North expressed the hope that come December 7, the electorate will endorse him as their next MP and retain President Akufo Addo.

The PC, Alhaji Manaf Mohammed Osumanu, was optimistic that based on the indelible achievements of the NPP, the good people of Ghana will give them the nod.

He mentioned flagship programs such as Free SHS, One constituency one ambulance, NABCO, 1D1F, creation of the Zongo Development Fund and Ministry respectively as some of the things that will give Akufo Addo the nod over his challengers.

He promised to work on six salient projects if given the nod as the next MP for Ayawaso North.

He among other things mentioned education, health, sanitation, advocacy as well as infrastructural and football development as some of the priorities to be tackled if voted into office as the next MP.

Alhaji Manaf pointed out that it is time the NPP annexes all the Ayawaso Constituencies in the Greater Accra Region.

He pleaded with the party faithfuls in Ayawaso North to kick start their campaigns vigorously. "We also need to work as a team to achieve our objectives."

Alhaji Manaf also used the opportunity to express his appreciation to the people of the Constituency for coming out massively to participate in the just ended voters register.

The Campaign Committee is under the co-chairmanship of the Ayawaso North MCE, Alhaji Mohammed Aminu Zakari and the PC, Alhaji Manaf Mohammed Osumanu.

Other dignitaries that graced the occasion included the National Nasara Coordinator, Abdul Aziz Futa and the Ayawaso North Constituency chairman, Mr Hussein Mahmud as well as some regional and national executives of the NPP.

The inaugural occasion was under the chairmanship of Hon. Alhaji Yussif Fofana, a former PC for the party in the constituency.