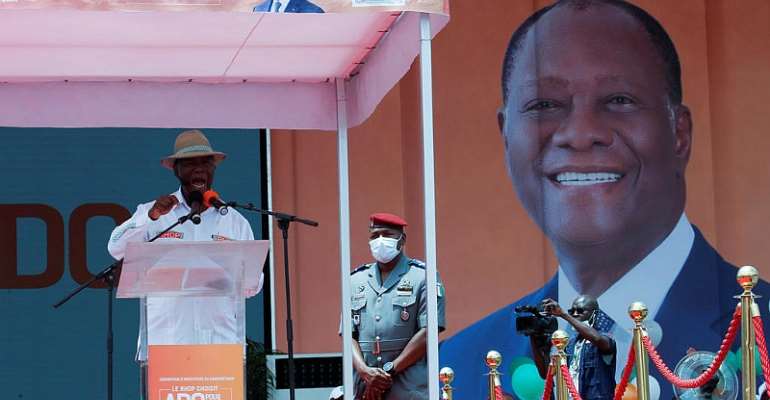 With only two months to go before Ivorians head to the polls to choose their new president, the picture is far from clear about whether the incumbent leader Alassane Ouattara is eligible to run for a third term.

Technically, the constitution limits the president to two terms, but Ouattara and his supporters argue that a 2016 constitutional tweak reset the clock. His opponents beg to differ.

"Article 55 of the constitution is very clear," says Alexandre Didier, coordinator of the non-governmental organisation Tournons La Page or Let's Turn The Page.

"The President of the Republic is elected for a five year-term by direct universal suffrage. He can only be reelected once. That excludes a third mandate," he told RFI.

Constitutional ambiguity
The confusion emanates from each side's interpretation of the new constitution explains Alex Vines, director of the Africa programme at Chatham House.

"It's ambiguous, possibly deliberately so, so that it's open to interpretation," he told RFI on the line from London.

The new constitution retains the two-term limit, but says nothing regarding terms served prior to its adoption.

"Therefore depending on what political position you stand, you will interpret it in a particular direction. It's that ambiguity that is not helpful," Vines said.

For Didier, there is no ambiguity about it. He showed RFI a 2016 tweet posted during the constitutional reform, stipulating that the "new constitution would not break with the old constitution's two-term presidential limit." The tweet has since been removed.

The president's dithering over whether to run again has also not helped.

"It's clear that Mr. Ouattara has been thinking about whether he should or should not run again for a while," continues Vines, pointing to the immense pressure on the 78-year-old not to seek a third term, notably from France.

Ouattara, who has governed since 2011, said in March he would not stand for re-election on 31 October.

"That has thrown things up in the air," comments Vines. "It is a worrying time for Côte d'Ivoire, there is a history, a tradition of electoral violence."

That history, which saw some 3,000 people killed following the 2010 election, is at risk of repeating itself.

Talk of Ouattara's running again sparked clashes earlier this month in the town of Divo, about 200 kilometers northwest of the capital Abidjan, and in Bonoua, some 80 kilometers from the capital. Eight people were killed and more than 100 injured.

"There were reports of armed youths attacking civilians in conjunction with law enforcement officers," Didier told RFI from Abidjan.

Democracy shrinking
On Friday, Amnesty International issued a statement condemning the crackdown on protesters opposed to Ouattara's decision to run for a third term in office.

For Didier, it is a sign that democratic space in Côte d'Ivoire is shrinking.

"Today, there are people who have the right to demonstrate without being stopped by police and those who are barred. Everyone should be allowed to demonstrate freely."

Ouattara has defended his third term bid, which he says was provoked by an "act of God" after the sudden death of his successor.

Still, his efforts to stay in power have raised concerns that Côte d'Ivoire will go the way of other African countries in repeating a practice whereby presidents remain for life.

Constitutional Council under scrutiny
If unchallenged, Ouattara will square off against 35 other candidates on 31 October, including 86-year-old former President Henri Konan Bédié and 67-year-old former Premier Pascal Affi N'Guessa.

Election authorities rejected the candidacies of former President, Laurent Gbagbo, and ex-rebel leader Guillaume Soro, who helped bring Ouattara to power before falling foul of him.

Nonetheless, on Monday Gbagbo filed his application for presidency, months after being acquitted by the International Criminal Court for crimes against humanity.

Gbagbo's refusal to cede power to Ouattara in 2010 triggered a post-electoral crisis that claimed 3,000 lives.

"The constitutional council played a role in that crisis from the moment it declared Gbagbo the winner," reckons Didier.

End bloodshed
For the NGO coordinator, institutions like the constitutional council must be strengthened to avoid a political vacuum. The body is yet to rule on whether Ouattara's third term bid is valid.

Opponents doubt the council's president, Mamadou Koné, who was handpicked by Ouattara, will rule against him.

That puts the onus squarely on Ouattara.
"We want the president to keep his word," insists Didier. "We want him to withdraw to avoid any further bloodshed."