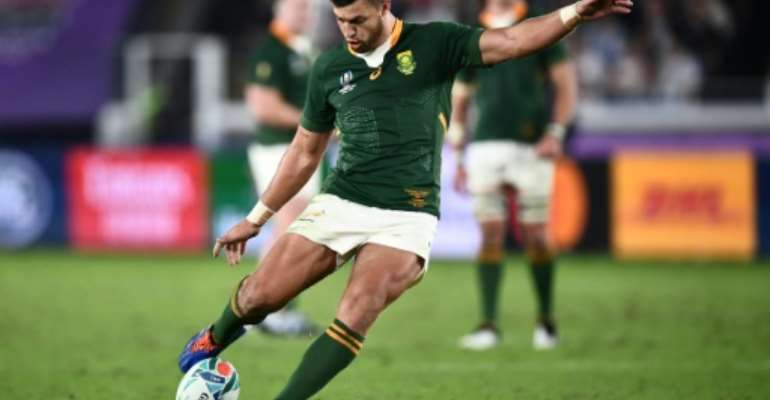 South Africa's Rugby World Cup winning fly-half Handre Pollard denied reports Monday linking him with a move from Montpellier to Bath at the end of the season.

Media in England including specialist weekly The Rugby Paper claim Pollard, 26, is a target for the English Premiership outfit just halfway through his deal with the Top 14 side.

According to the publication the West Country side are looking for a Test quality outside-half and could also turn to Pollard's club and international team-mate Johann Goosen.

"It is very frustrating but it happens a lot. You can't let it get to you.

Pollard's club open their new campaign by hosting Pau on Friday despite 11 of France's 30 professional clubs recording cases of coronavirus.

The French league have announced their COVID-19 protocols which include testing three days before each match and if two or more cases are recorded at one outfit then their next game will be postponed.

"I'm not tired of the tests, it's what we have to do. We as players are tired of not playing rugby," he said.

"If that's what they want to do we'll do anything they want us to do. We have tests every day if it's necessary," he added.

Former France head coach Philippe Saint-Andre has been appointed director of rugby by Montpellier's billionaire owner Mohed Altrad to replace Kiwi Vern Cotter who has taken up a position with Fiji.

Altrad has altered his policy of recruiting foreigners by signing home talent such as France winger Vincent Rattez and former les Bleus youth internationals Florian Verhaeghe and Mickael Capelli for the new campaign.

"Absolutely there's a change. In terms of the structures they've put in, the people they've put in, management, medical, coaching, everything. It's a lot more French than it used to be," he said.

"I really feel the foreign boys are trying their best to get to know the French culture, learn the language as quickly as possible and becoming a part of their way of doing things.

"We came to their country and so we have to adjust. For me it's exciting and I feel the French boys are enjoying it being a bit more French."

Latest Photo Reports
Catch up with all the political quotes from our politicians.
Advertise here
More Africa
ModernGhana Links
Fired-up All Blacks chase Rugby Championship whitewash
Bekele reveals plan to run marathon in under two hours
Working session of the Technical Committee for the selection of beneficiaries of the Young Graduates Internship Programme in ECOWAS institutions, 2021 edition
Niger speeds up efforts to build first hydroelectric dam
Soul-searching for Boks ahead of 'special' 100th All Blacks clash
Mandela to 'House of Pain': Five epic Springboks v All Blacks matches
'God Has a Dream': top seller for Tutu's 90th-birthday auction
The race to vaccinate: why Africa is struggling to get Covid jabs
Sahara camel race glory brings boy jockey big dreams for his future
TOP STORIES

W/R: Adiembra residents save 17-year-old student from kidnap...
40 minutes ago