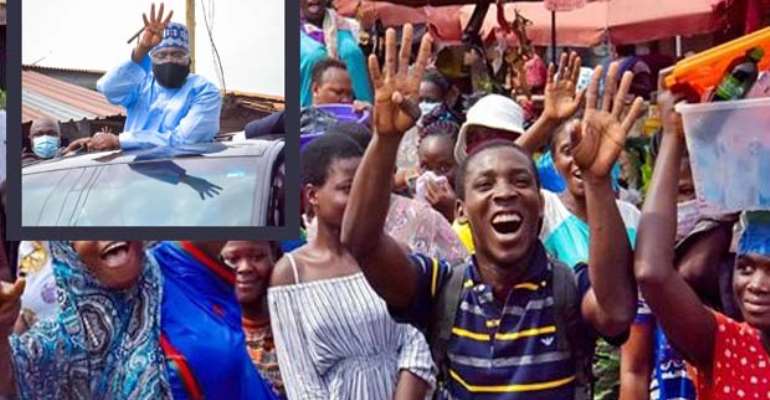 Bawumia (inset) acknowledging the cheers by the ecstatic residents

An unannounced visit for the weekly Islamic Friday congregational prayers in Ashaiman by Vice-President Dr Mahamud Bawumia sparked a massive spontaneous endorsement of the ruling party’s 2020 elections campaign slogan, “4 More 4 Nana”, by traders in Ashaiman upon seeing the Vice-President’s entourage.

After observing Jummah prayers at a community mosque at Fitter Line, a suburb of Ashaiman, the Vice-President had a torrid time making his way through the streets of Ashaiman as scores of traders spontaneously lined up on the streets to cheer him on.

Amidst chanting of popular NPP slogans and social intervention policies, the ecstatic traders and passersby raised up their four fingers, signifying the popular NPP 2020 campaign slogan, “4 More 4 Nana To Do More”.

Dr. Bawumia granted their request and waved at them through the opened roof of his car, before they opened way for his entourage to slowly drive out through the long stretch.

As the car moved, scores of people continued to follow the car and more traders in both shops and on the streets chanted and sang praises of Akufo-Addo's government.

After the Jummah prayers, Dr Bawumia visited the Ibn Abbas mosque where he interacted with fellow Muslims, including leadership of various Islamic sects in Ashaiman.

Dr Bawumia rounded off his visit by making stop overs at the Palace of the Muslim Chief of Ashaiman and Tema, as well as the Chief Imam of Ashaiman, where he interacted with the community members.

Throughout his interactions, Dr Bawumia stressed on the government’s all-inclusive policies, especially the flagship Free SHS, which he said was providing free senior high school education for all regardless of social and economic status.

For deprived communities such as Zongos, Dr Bawumia said the government’s vision was to accelerate development through the Zongo Development Fund and improve human resource through accessible education.