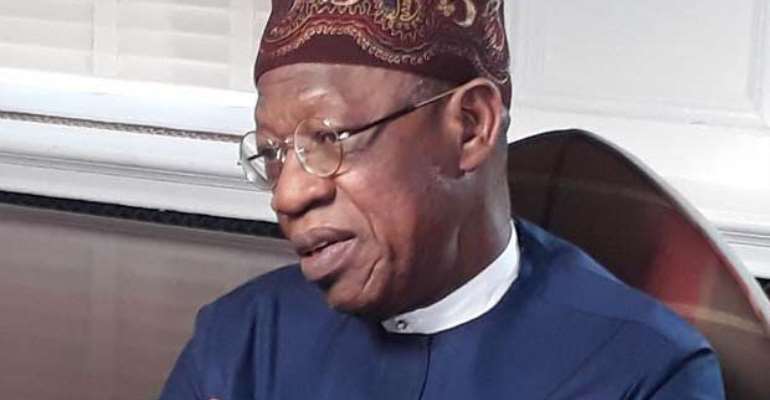 Lai Mohammed, Nigeria's Foreign Affairs Minister, could have avoided what by all standards is the needless diplomatic spat he has triggered between the two sisterly nations of Ghana and Nigeria.

He crafted a statement which fell short of bearing a true reflection of a so-called harassment of Nigerians in Ghana and the imminent xenophobia they face here.

Besides the embarrassing untruths contained in the statement, there is a dearth of understanding of the history—steeped relationship between the two countries dating back to centuries; the products of which are Ghanaian Hausas and Yorubas, who are part of the country's demography.

Both have been part of the formative years of the Gold Coast and eventually the newly independent Ghana.

Archival documents abound which are testaments to the age-old relationship between the Yorubas and the Gas, especially King Tackie Tawiah I on one hand and the Ashanti Kingdom and Hausa clerics.

There have been significant intermarriages between the Gas and Yorubas. Today, Hausa is one of the Ghanaian languages, a variant of the one spoken in Kano and Katsina.

Xenophobia, as the Nigerian government statement seeks to impress, is not part of the Ghanaian DNA. The Nigerian Mission would have been able to relay a better and informed report to Abuja, had it bothered to do a thorough investigation of the subject.

We are tempted not to blame the Hon. Lai Mohammed very much because after all he relied on what was fed him by his country's mission in Accra.

There are more Nigerians engaged in the informal sector than those at the Tiptoe Lane dealing in mostly mobile phones and other items. These are people who would attest to the hospitable reception they receive from their Ghanaian hosts.

Ghana and Nigeria belonged to the same colonial stable until both parted ways with their individual independence. Indeed, the two were amalgamated in 1874 with a common governor resident in Lagos, amalgamation which was reversed in 1886.

We are bemused that the Nigerian government has still not appreciated the decision by her Ghanaian counterpart to replace the demolished mission property, the subject of a diplomatic wrangling even when the issue was a private/commercial one.

Hon. Lai Mohammed's statement points at what he remarks as media attack of Nigerians and deliberate deportation of citizens of the West African country, accusations which are fallacious and outlandish.

Ghana like Nigeria does not control the media; the freedom of the press is highly upheld. For a statement such as the one under review to present government as being behind media reports is to exhibit ignorance of the workings of the media in both countries and to even underrate the maturity of the fourth estate of the realm.

The decision by sub-editors to highlight in their headlines the nationalities of 'criminals' cannot be blamed on government as our sister country's government has done. We shall return.