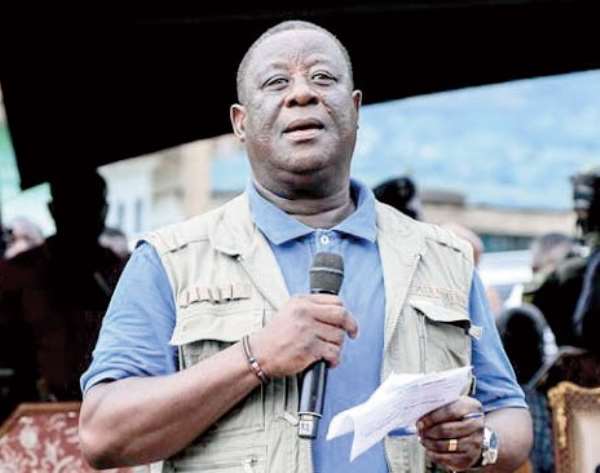 Minister of Roads and Highways Kwasi Amoako-Atta has urged the members of the New Patriotic Party (NPP) to campaign based on the track records of President Akufo-Addo as they head towards December polls.

The Member of Parliament for Atiwa West constituency in the Eastern Region then charged the campaign team to make President, Akufo-Addo the reference point in their campaign since he is the leader of the party at the moment.

According to him, “I'm entreating all of you to project our presidential candidate, Nana Akufo-Addo because he deserves to be given another term looking at the good work he has done in the past four years. The president is a gift from God so we need to push him to the apex.

“He is kind, committed and ready to die for the country. Some of us are not surprise that despite what he went through he was not discouraged until he became the president for the country” he said.

Amoako Atta who made this assertion at the inauguration of his 2020 campaign team at Kwabeng the district capital said it won't bother him much should he lose his parliamentary seat for the President to maintain his seat for the second time but says the President will need MP's to work with.

According to him, construction, infrastructure, development and other things going on in the country falls under the good work of the President.

He said the government is set to roll out roads documents in October, adding that the President has done enough in terms of roads and has indicated his performance stands tall and cannot be compared to any previous government within the same space in office.

“If you use three to four years as a common denominator for all previous government, I can tell you as his minister of roads and highways that he has perform better.

“I know what I am talking about because I have empirical facts and that, there is no government since independence that has developed road infrastructure within the same time frame that what Nana Addo has done”

“I challenge anybody for any debate any time anywhere that from independent no government have improved road infrastructures than the current president and you can make the emphasis of interchange and as we speak now there are four interchanges that are taken place simultaneously” He emphasized.

“From October, we are rolling a documentary on the road sector. We will take it region by region and Ghanaians will be amazed about the kind of road infrastructure that has been put in place under Akufo-Addo's government. In fact, other parties should have prepared to throw in the towel if roads were the measurement for a party success” he said.

He affirmed that despite the outbreak of the coronavirus pandemic government has been able to embark on a lot developmental project and has commended the exceptional leadership style of the President, Nana Akufo-Addo in fighting against the disease.

Mr Amoako Atta affirmed that he does not think Ghanaians will make a mistake in the upcoming elections though he is not being complacent but has expressed believe that Ghanaians will not just renew his mandate but renew it massively.

He entreated the Party members to project the President in the upcoming elections since he has a lot to do for the country and also charged the Ghanaians to vote massively for President Akufo – Addo on 7th December.