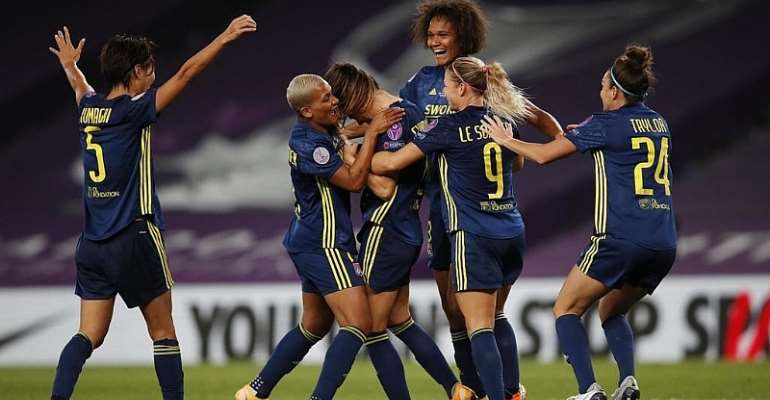 Lyon extended its dominance of women's European football with a fifth consecutive UEFA Women's Champions League title with a 3-1 win over Wolfsburg on Sunday, its seventh title overall.

No football team has equalled Lyon's success in Europe since Real Madrid won five consecutive titles in the men's league between 1956 and 1960.

The club, officially named L'Olympique Lyonnais, went into the final with a few constraints, namely the absence of Norway's Ada Hegerberg and Amandine Henry out with an injury sustained in quarterfinals.

Eugénie Le Sommer put Lyon ahead in the 25th minute and Saki Kamagai bolstered the French side 20 minutes later.

Wolfsburg, seeking a third title after triumphs in 2013 and 2014, started laying on pressure in the second half with Alex Popp in the 58th before Bjork Gunnarsdottir shored up Lyon's lead in the 88th.

“It's actually quite difficult to believe we've managed our fifth straight title, to be honest,” Lyon's Sarah Bouhaddi said. “We're super proud of ourselves, it was a very difficult competition.”

It was the fourth final between the two clubs and the third in the past five years. Wolfsburg triumped over Lyon in 2013 but lost in 2016 and 2018.

It was also the German side's first loss in 41 games since a 4-2 home defeat in the 2019 Champions League quarterfinal, again against Lyon.

“We played a great seasons, we can be proud, and I can be proud to be part of this team,” Popp said.

Lyon has not lost a competitive match since the French Cup final against Paris Saint-Germain in May 2018.

The the semifinals of the final-eight mini tournament were played without fans owing to the Covid-19 epidemic northern Spain.

The final was played at Real Sociedad's Anoeta Stadium in the city of San Sebastian.

Mahama becoming President again is one of the greatest calam...
40 minutes ago

What Shatta Wale did was childish and stupid — Nii Ayitey An...
48 minutes ago