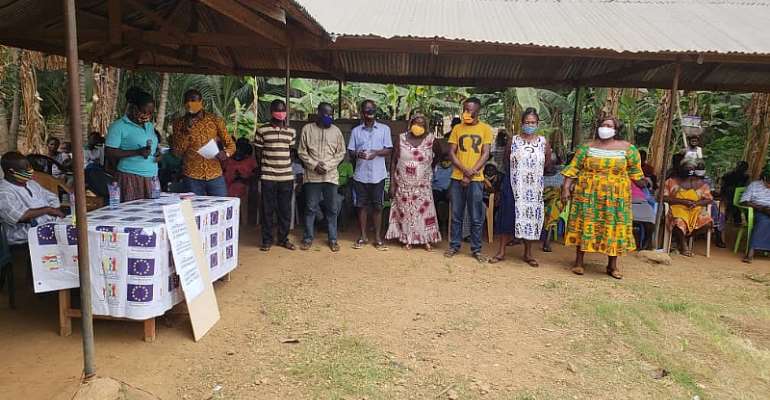 The National Commission for Civic Education (NCCE) with the support of the European Union’s Anti-corruption, Rule of Law and Accountability program (ARAP) organized Social Auditing at Potroase.

This was in fulfillment of the provision of the constitution; Article 240(e): To ensure the accountability of local government authorities, people in particular local government areas shall, as far as practicable, be afforded the opportunity to participate effectively in their governance.

The meeting brought together the Potroase Traditional Authority, Heads of Institutions, Assembly and Unit Committee members, Farmer Based Organisations, CSO, Persons with a disability, and the people of Potroase.

Mr. Eyram Zander Yaw Fiawotso, the Kyebi Municipal director of NCCE explained that the purpose of the meeting was to give citizens the opportunity to contribute to identifying issues that affect development and access the performance of duty bearers in the country.

In addition, Social auditing calls for participation in the governance process promotes democracy and enhances social, economic, political, and cultural development within a relatively peaceful and stable environment. He continued by encouraging participants to participate in the auditing.

The people of Potroase commended the government for the asphalting of the Kyebi to Suhum main road and the commencement of the construction of the Potroase to Obuasi road.

After deliberations and discussions, it was realized that the community was in need of a maternity ward, portable water, management of thee refuse dump, provision of a safe passageway for Potroase M/A basic school children, expanding the employment opportunities for the youth of Potroase.

Participants and key stakeholders scaled-down the problems to two needs. They ranked the need for a maternity ward for the community and management of the refuse dumping site as their main challenges.

Representatives from the Municipal Assembly said that they were going to forward the need for a maternity ward to the appropriate desk. The community promised to support the government with land, sand, stones, and labour in support of the project when it is approved to be constructed.

The municipal officer in charge of feeder roads, Mr. Paul Agyeman agreed to arrange with the Potroase to Obuasi road contractor to level the heap of refuse at the dumping site.

The officer in charge of Zoom lion Mad. Edna Dzifa Doe said that she will forward the petition for a community maximum size refuse container to aid in the problem of sanitation in the community.

The Environmental officer Mr. Emmanuel Buamah explained that the community has a role to play in maintaining hygienic standards. He cautioned farmers who rear animals against allowing them to pollute water bodies and causing other damages to crops. He mentioned that the department was going to conduct a screening exercise for all food vendors and encouraged all food vendors to participate in the exercise when it is due.

A seven-member committee comprising of stakeholders from Traditional Authority, FBOs, Women’s group, Youth Group, PDWs, Farmer group, and Skilled workers group was formed. Their immediate task is to propose an implementation plan on the selected issues and coordinate with feeder roads on his pledge of making recommendations on a bypass road leading to the community’s basic school to be added to the government’s earmarked road project for the community.

MMDCE appointments shouldn't be seen as job for the boys' - ...
24 minutes ago