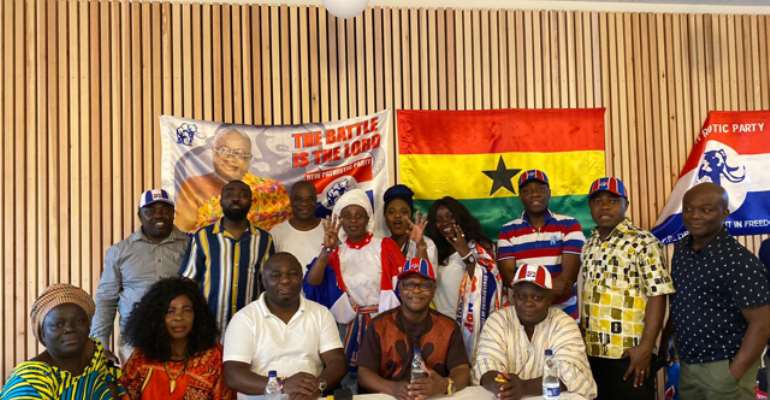 NPP Denmark branch has opened a new chapter in a colourful meeting held in the Midtjylland city of Horsens. The new chapter is christened NPP-Midjylland chapter. The branch Chairman, Mr. Kennedy Adjei, in his address walked the audience through the formation of NPP-Denmark and how it has evolved over time to become a well-known and respected branch party today. The Chairman recounted the difficulties the branch’s leadership and members have had to overcome to get to this far due to the hitherto lack of political culture among Ghanaians in Denmark. He also spelt out the vision and the strategies of the current executive team to move the branch from its relative obscurity to become strong and vibrant with significant influence in the mother party. He further pointed out some of the concrete achievements and activities that have ensured the steady growth and acceptance of the party in Denmark, and passionately appealed to the audience to strongly dedicate themselves to the cause of NPP and Ghana. Chairman Adjei thanked the audience on behalf of the branch, for taking the initiative to organize themselves to form a chapter, urging them to work hard to organize themselves well in order to strengthen the branch as a whole.

On his turn, the branch’s Gen Secretary, Mr. Paul Kyei, explained the processes of becoming a member of NPP-Denmark. He highlighted the duties, obligations and rights of all members as per the constitution of the party. Many concerns were raised by the new chapter members particularly on issues of welfare during the question and answer section. The executive members took turns to address them all. Welfare officer, Freddy Amoako Dadey, took his time to explain well the way welfare is managed in the branch to the satisfaction of all.

Chairman Adjei was full of praise of the branch’s women organizer (Ms. Ruth Neumann) and the chapter’s acting secretary (Mr. Lawrence Kwofie) for their efforts in putting together an impressively well-organized event and indicated that the executive committee will be working to invite some party stalwarts to come and help formally inaugurate the new chapter in a big way at the appropriate time to further project NPP-Denmark. He also acknowledged Ohemaa Joyce, Mrs. Scholastica Solem, Nana Owusuaa, Mr. Joe Anokye, Nana Adwoa Mprengo Asipim 1 and others who assisted in various ways to make the occasion a success.