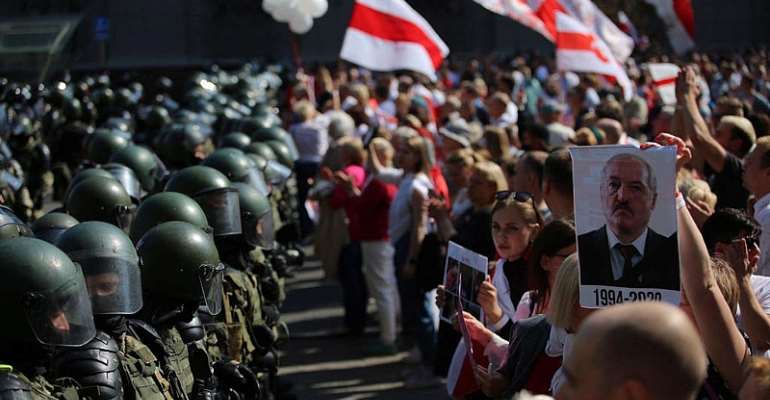 As a reported 100,000 people protested on Sunday against Belarus' disputed President Lukashenko, France condemned an 'arbitrary' media crackdown after the accreditations of several journalists working for foreign media were withdrawn.

"I call on the Belarusian authorities to reverse these measures without delay," France's Foreign Minister Jean-Yves Le Drian said in a statement, saying that the crisis in Belarus requires "the establishment of an inclusive national dialogue".

Belarus government spokesman Anatoly Glaz said the decision to revoke the media accreditations was taken on the recommendation of the country's counter-terrorism unit.

He did not specify how many journalists were affected by the measure, but foreign media including the BBC, Reuters, AFP and Radio Liberty reported the withdrawal of accreditation of several of their journalists.

Minsk protests
Tens of thousands of Belarus protesters joined an opposition rally in Minsk on Sunday in the latest mass protest against the re-election of President Alexander Lukashenko, local media reported.

An AFP journalist and local media estimated that more than 100,000 people came to Sunday's protest, equalling the scale of the rallies on previous weekends, the largest demonstrations the country has seen since independence from the USSR.

Some protesters gathered around Lukashenko's official residence in the centre of Minsk, the Palace of Independence, which was guarded by a cordon of riot police and special forces with helmets and anti-riot shields,