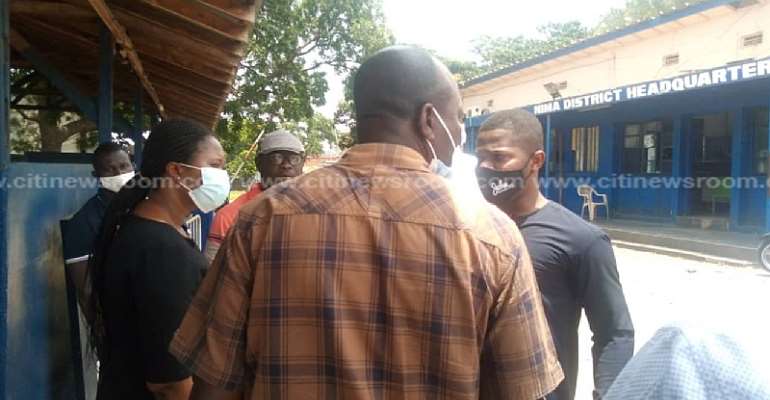 Some members of the opposition National Democratic Congress (NDC) have thronged the Nima Police Station in Accra to demand the release of the President of the Concerned Small Scale Miners Association, Michael Kwadwo Peprah.

Michael Kwadwo Peprah is said to have been picked up on Saturday, August 29, 2020, by the Cyber Crime Unit of the Central Police in Kumasi for allegedly causing fear and panic in a Facebook post.

He was subsequently transported to Accra.

There are claims that Mr. Peprah was arrested on the orders of the Minister of Environment Science and Technology, Professor Frimpong Boateng.

The National Communication Officer of the NDC, Sammy Gyamfi described the action as intimidation by the Akufo-Addo government when he engaged the media at the Nima Police Station where Michael Kwadwo Peprah is currently being kept.

“This morning we got information that the president of Concerned Small Scale Miners Association of Ghana has been arrested by officers belonging to the Cybercrime Unit of the Ghana Police Service in the Ashanti Region. We understand that he was detained at the Ashanti Regional Office and this morning transported to the Nima Police Station. We’ve spoken to him and he tells us that he was arrested yesterday at 3 pm in Kumasi and was not told the reason for his arrest. His phones were seized and taken to his house and a search was conducted.”

“We have gathered information that he was arrested over a post he made on his Facebook wall ahead of the Association's planned press conference to compare the NPP’s manifesto and that of the NDC on the issue of small scale mining. Our sources at the Cyber Crime Unit tell us this arrest was on the orders of the Minister of Environment, Prof Frimpong Boateng who is not happy at how the association of small scale miners led by Mr. Preprah has exposed the criminal galamsey he has been supervising and we see this as clear intimidation by the Akufo-Addo administration,” Sammy Gyamfi added.

Mr. Gyamfi further called on all other civil society organisations to speak up and condemn the action being meted out to Mr. Peprah.

“We humbly entreat the media and CSOs to follow this matter and give it the attention it deserves.”

Sammy Gyamfi in an earlier statement condemned the arrest and described it as shameful. Read Sammy Gyamfi’s full post below:

The National Democratic Congress, has just learnt of the arrest and detention of the President of the Concerned Small Scale Miners Association, Michael Kwadwo Peprah for a post he made on his Facebook wall, ahead of the Association's planned press conference to expose the Akufo-Addo-government on mining related issues.

Michael Kwadwo Peprah was arrested in the Ashanti region last night and is currently at the Central Police Station in Kumasi waiting to be transported to Accra, on the orders of the Environment Minister and Chief “Galamsey” promoter, Professor Frimpong Boateng.

The NDC condemns this shameful act, which is part of a desperate scheme by the oppressive and despotic Akufo-Addo-government to intimidate, harass and silence critical voices ahead of the 2020 general elections.

We are reliably informed, that as we speak, Michael Kwadwo Peprah has not been given access to his lawyers by the Police. We humbly entreat the media and CSOs to follow this matter and give it the attention it deserves.

Let's us speak up against the culture of oppression and tyranny being supervised by President Akufo-Addo, because injustice anywhere is a threat to justice everywhere.