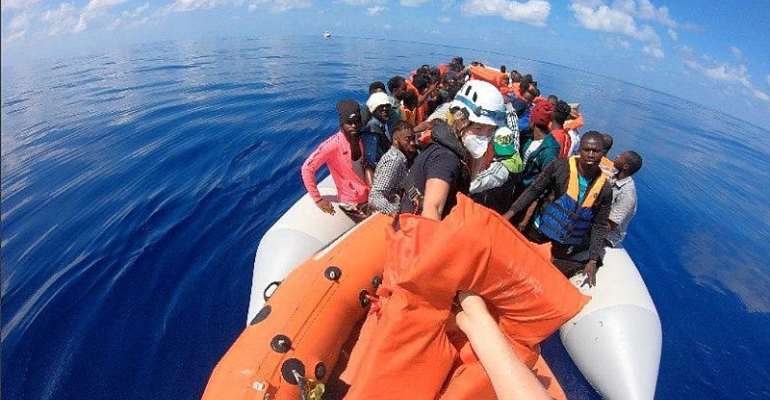 All of the migrants on board the Louise Michel rescue ship funded by British street artist Banksy have been transferred to other vessels, the team behind the mission have confirmed. On Saturday, the ship carrying more than 200 distressed passengers sent an urgent call for help.

An Italian patrol vessel rushed to the stranded MV Louise Michel in the Mediterranean and took in 49 of the most vulnerable people on Saturday, the coastguard said.

The remaining migrants on board, around 150 people, were transfered to a vessel chartered by German NGO Sea Watch and medical charity Doctors Without Borders (MSF), according to tweets from both organisations and the Louise Michel's crew.

"For those most recently embarked, medical assessment is ongoing, with the clinic full and #MSF medics treating people for fuel burns, dehydration, hypothermia and traumatic injuries," the MSF Sea Twitter account said of the situation on board the Sea-Watch 4.

The German-flagged Louise Michel had said it needed aid after helping a boat carrying at least one dead migrant.

Some badly injured with fuel burns

The crew said the 31-metre ship had become overcrowded and unable to move, warning that some of the migrants had fuel burns and had been at sea for days.

"Given the danger of the situation, the coastguard sent a patrol boat which took in 49 people deemed the most fragile, including 32 women, 13 children and four men," said a coastguard statement.

The rescued migrants later said three people had died at sea before the arrival of the Louise Michel.

Banksy, who keeps his identity a secret, explained in an online video that he had bought the boat to help migrants "because EU authorities deliberately ignore distress calls from non-Europeans".