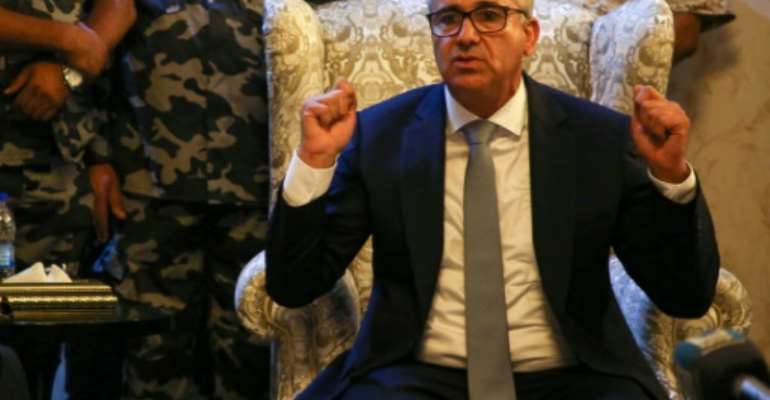 Libya's Interior Minister Fathi Bashagha says he was ready to submit to an investigation after being suspended by the UN-recognised government over statements he made about protest against living conditions in the crisis-hit North African country. By - (AFP)

The head of Libya's unity government on Saturday appointed a new defence minister and army chief, after days of protests against poor public services and living conditions.

The decrees followed the announcement hours earlier by Libya's UN-recognised Government of National Accord (GNA) that it had suspended its interior minister after militia gunmen fired on peaceful demonstrators last week.

Haddad hails from Misrata, 200 kilometres (125 miles) east of Tripoli, the home of powerful armed groups that have fought on the side of the GNA in the battle against eastern-based military strongman Khalifa Haftar, who tried to seize the capital last year.

The appointments come days after Sarraj announced a government reshuffle in response to growing popular discontent in Tripoli and other western Libyan cities under its control.

Hundreds of demonstrators staged rallies from Sunday in Tripoli against corruption and extended shortages of power, water and fuel in the oil-rich North African country. Gunmen fired on crowds on several occasions.

In response, the GNA said Interior Minister Fathi Bashagha "has been temporarily suspended" pending an inquiry "on his statements about the protests and incidents in Tripoli and other cities".

Bashagha, who was visiting the GNA's main backer Turkey, said in a statement posted on the interior ministry's Facebook page early on Saturday that he was ready to submit to an investigation.

But he demanded any hearing be broadcast live for the sake of transparency.

Upon his return to Tripoli on Saturday evening, Bashagha told a crowd of supporters at the Mitiga airport: "I am ready to be questioned. I have nothing to hide."

"Everyday life in Libya is painful," he said, blaming hardships in the country on "corruption in all sectors".

A police marching band, security forces commanders and supporters of the suspended interior minister had thronged the airport for his return home.

Libya has endured almost a decade of violent chaos since the 2011 NATO-backed uprising that toppled and killed veteran dictator Moamer Kadhafi, with the GNA and a Haftar-backed eastern administration now vying for power against a backdrop of dozens of local conflicts.

It's not good at all — GMA expresses concerns over rising CO...
39 minutes ago