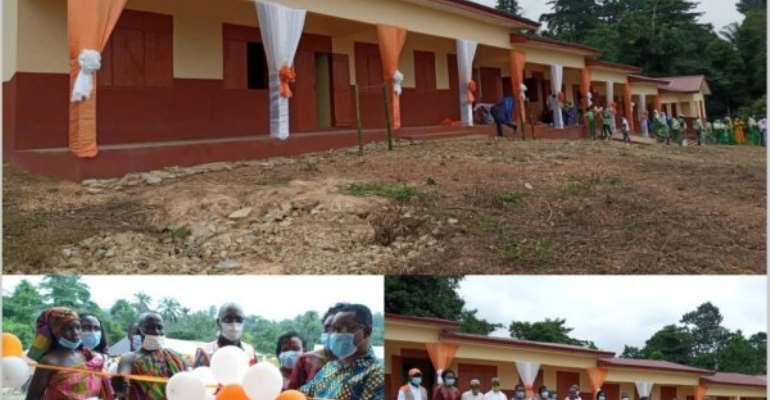 The 28.3 hectares Automated Drip Irrigation Schemes were developed by the MEDA.

The Project was funded by the Global Affairs Canada (GAC), a Canadian Government Agency, at the cost of 756,000 Canadian dollars.

Meanwhile, MEDA officially handed over the project to the Ghana Cocoa Board (COCOBOD) at a brief ceremony in Accra.

MEDA, an international economic development organization, with a mission of creating business solutions to eradicate poverty, is implementing the Farmers' Economic Advancement Through Seedlings (FEATS) Project in Ghana.

MEDA identified the Cocoa Seed Garden as a critical plank in the cocoa value chain in Ghana, which led to MEDA's partnership with COCOBOD.

Using hybrid cocoa trees developed by the Cocoa Research Institute of Ghana (CRIG), COCOBOD through these seed gardens ensures that only high-quality cocoa seeds and seedlings are distributed to Ghanaian cocoa farmer.

The schemes are anticipated to support some 3,000 to 5,000 cocoa farmers with free high-quality hybrid cocoa seeds and seedlings to either replant their old cocoa farms or replace their diseased cocoa trees.

The installations are expected to lead to a 30 to 50 per cent increase in cocoa pod production, which will in turn, support an additional 3000 to 5000 cocoa farmers with free high-quality hybrid cocoa seeds and seedlings to either replant their old cocoa farms or replace their diseased cocoa trees.

Speaking at the handing-over ceremony held at COCOBOD Headquarters in Accra, MEDA Ghana Country Director, Robert Austin, said in 2019, the scope of work agreement was signed between the two organizations.

Mr. Austin assured COCOBOD that the contractor had to remain on site for a year under warranty condition to ensure that any equipment that develops fault was repaired.

According to Mr. Austin, the schemes will help increase cocoa production in Ghana, a country ranked as the second largest producer of cocoa beans in the world.

The irrigation system will aid in increasing cocoa production if managed effectively, he said.

With the irrigation schemes, he indicated that it was now potentially possible for every cocoa farmer to irrigate his/her farm.

"Going forward, what is important for MEDA, and we are confident COCOBOD will do this, is to effectively manage this 28.3 hectares, show clearly the increase in production of cocoa pods and by extension, demonstrate to all cocoa farmers in Ghana that by investing in irrigation for their cocoa farms, they may significantly increase their income from cocoa,” Mr. Austin says.

The Chief Executive of COCOBOD, Mr Joseph Boahen Aidoo, in a statement read on his behalf, thanked MEDA and the Canadian Government for successful completion and funding of the project.

"The coming in of MEDA with financial support from Global Affairs Canada (GAC) for this important project in the two cocoa stations is very appropriate and timely," he said.

The Acting Canadian High Commissioner to Ghana, Annika Allman, says Canada was delighted to be able to support the project.