Police break up anti-coronavirus rallies in Paris and Berlin 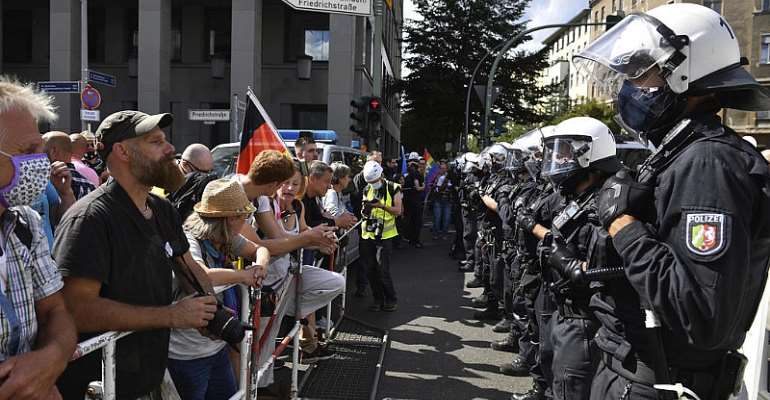 German police halted a march that gathered around 18,000 coronavirus sceptics in Berlin, as some 300 people protested in Paris against the compulsory wearing of masks in the city.

In Berlin, mass protests against pandemic restrictions had been allowed to go ahead after a bitter legal battle.

The protests had barely begun at 9 am at the city's iconic Brandenburg Gate when it was stopped by the police, who claimed that the participants were not respecting minimum social distancing measures.

After the announcement, the demonstrators shouted 'Resistance' and 'We are the people,' a slogan often used by the far-right, and sang the German national anthem.

Last-minute permission from city court
Berlin city authorities had previously decided not to allow the Saturday demonstration to go ahead, fearing that the estimated 22,000 protesters would not adhere to 1.5m social distancing rules.

The ban sparked outrage from organisers and their supporters who flooded social media with angry messages vowing to protest anyway, with some even calling for violence.

But on the eve of the demo, Berlin's administrative court sided with the demonstrators, saying there was no indication that organisers would "deliberately ignore" social distancing rules and endanger public health.

Merkel and the leaders of Germany's 16 federal states on Thursday introduced tougher coronavirus restrictions to curb the pandemic, including a minimum 50 euro fine for people caught not wearing face masks where one is compulsory.

A few Yellow Vest protesters were reported to be amongst them.

The demonstrators accused the government of 'manipulating' people through fear, claiming that making face masks compulsory in big cities was not 'scientifically justified'.

The protesters were surrounded by police who fined several people 135 euros for not wearing face masks.