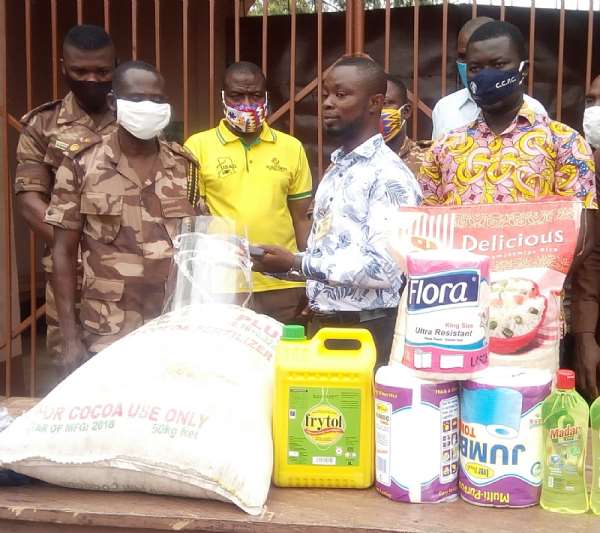 The Founder, Honourable(Hon) Ebenezer Kwaku Addo accompanied by the Party's Constituency Chairman and other Executives said, the Foundation has decided to support the Prisons Camp periodically to position officers to undertake their duty as expected and also to improve the living standards of inmates.

According to him, in order to tell inmates that they are not neglected by society due to where they find themselves, such gestures must be exhibited often by individuals, Non - Governmental Organization(NGOs), companies among others nationwide.

He explained, the Foundation which is centered on maternal and child health support, youth development and advocacy and educational support will continue to provide the needed support to the Prisons Camp especially the inmates to position their minds that all is not lost in life irrespective of where they are and what brought them there.

Hon. Ebenezer Kwaku Addo had brief interaction with the inmates to assure them that all is not lost and what they need to do is to respect their officers who are trained and mandated to direct and reshape their lives before they are discharged.

The District Prisons Commander who doubles as the Officer In - Charge of the Kenyasi Prisons Camp, Chief Superintendent D. Y. Mensah received the items on behalf of the Camp and thanked the Foundation for its support which is of importance.

He explained, there is no way the government alone can meet the demands of the Camp so donations by individuals, NGOs and companies are always welcomed and laudable.

He said for people to donate and interact with them especially the inmates help a lot in their reintegration into the society smoothly because definitely they will be discharged. According to him, they really appreciate the initiative of the Foundation to always support the Camp to enhance development.

Chief Superintendent D. Y. Mensah made a passionate call to individuals, NGOs, and companies to come to support the construction of clinic which will address all forms of the sickness of inmates during their stay.

He mentioned that already nurses are stationed and to make their work effective it will be prudent to have the clinic completed in no time.

"We need building materials badly to complete our clinic to reduce the hardship we go through when inmates fall sick," he said.