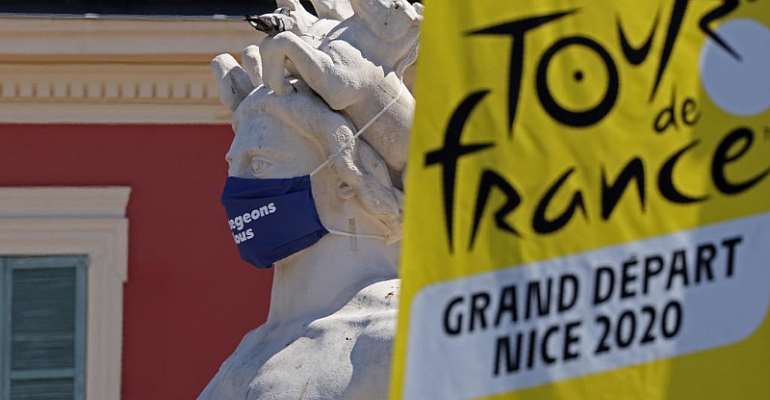 The Tour de France rolls out from the French Riviera on Saturday, two months later than planned and under the shadow of a coronavirus pandemic which could still shatter hopes of the world's greatest bike race making it to the Paris finish line in three weeks' time.

The Covid-19 pandemic has this race in its grip.
Originally scheduled for June, stage one of the three-week epic over the peaks and plains of France embarks on Saturady from Nice's Promenade des Anglais for a 154km loop. Enthusiasts will tune in to TV coverage in 190 countries.

The race organisers have confirmed that any team that has two members test positive will be expelled from the Tour. This includes riders and support staff.

Belgian team Lotto has already sent home four of its staff after one positive test and one "suspicious" result.

Saturday's Promenade des Anglais start in Nice will be watched by just 100 spectators.

Throughout the Tour, a virus testing unit will travel with the teams.

That means a cataclysmic change for organisers, with some climbs in previous years attracting hundreds of thousands of people along the roadsides.

Health and safety protocols for riders and teams involve them being kept in virtual isolation and tested several times, with the smallest possible interaction between respective groups.

Selfies will be frowned upon.
Dave Brailsford, the head of Team Ineos which has grabbed seven of the last eight Tour de France titles, admitted there remains uncertainty over the race getting to the Champs-Elysees on September 20.

"If there comes a point when it becomes too much of a risk for riders and teams, to society in general, then people need to take that on board," he said.