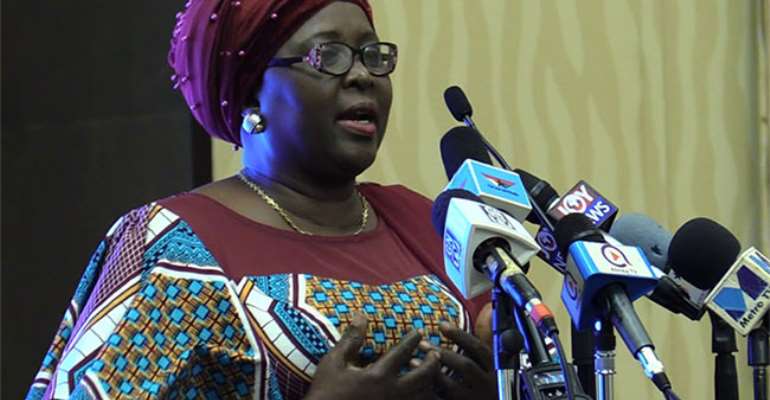 Government says it has spent over GHC76 million towards the disinfection, fumigation and cleaning-up of markets, lorry parks and public toilet facilities across the country.

The first phase of the disinfection and clean-up exercises formed part of the government’s response towards preventing the spread of the Coronavirus disease in the country.

Minister of Local Government and Rural Development, Hajia Alima Mahama, announced this in Accra when she took her turn of the Meet-the-Press series.

She said the Ministry set up disinfection teams at the local level, disinfected and fumigated more than 2,000 market centres and 2,000 public toilet facilities.

The amount went into purchasing of disinfectants, spraying machines, personal protective gears for sprayers, and other useful items secured for the exercise.

The Minister said the contract for the second phase of disinfection had been signed and would soon begin.

Giving accounts of financial inflows to the MMDAs for development, the Minister explained that GHC4.5 billion was transferred to the 260 Assemblies for infrastructural development including; education, healthcare, water and sanitation facilities and expressed satisfaction over the utilisation and work done so far with the funds by the MMDAs.

She noted the Ministry was mandated to promote good governance, equitable and balanced development across the country and was delivering its mandate through the formulation of policies on rural and urban development and designing systems to monitor the implementation of those projects.

Hajia Mahama assured of government’s unalloyed commitment to implement socio-economic interventions across the country to ameliorate the suffering of the masses, especially the poor and vulnerable.

The Minister indicated that in the second term of the Akufo-Addo led government, it was poised to engage all stakeholders towards building a consensus and amending the entrenched provisions in the 1992 Constitution for the election of Metropolitan, Municipal and District Chief Executives on partisan basis.

That, she said, would enhance transparency and accountability at the local governance set up.