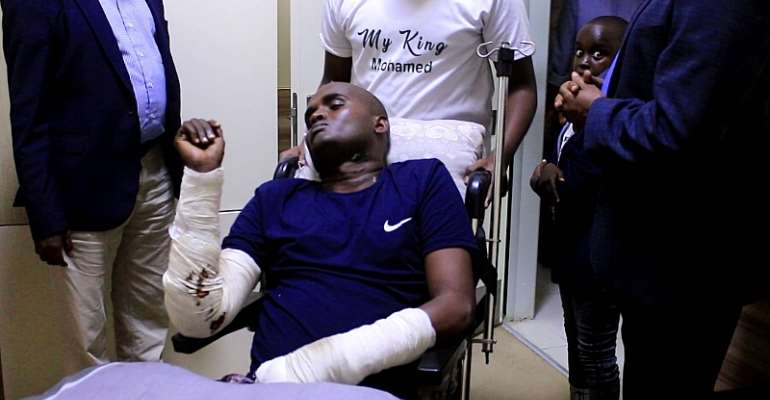 Araye sustained variety of shrapnel wounds from the suicide bombing that also claimed the lives of more than 15 civilians. FESOJ and a delegation including media directors from Universal TV, SNTV, Dalsan TV, CSO reps and MP Abdi Shire visited the journalist at the Erdogan Hospital in Mogadishu where he was hospitalized.

“Free Press Unlimited and FESOJ stands in solidarity with Araye, we pray for his quick recovery and we hope the FPU cash assistance received can help settle his medical bills.” Mohamed Moalimuu, Secretary General of the Federation of Somali Journalists (FESOJ).

Abdirahim Isse Addow, the director of labor and human resources at the Ministry of Information of Federal Government of Somalia also thanked the Free Press Unlimited for providing immediate assistance to injured journalists to help cover medical expenses, at a time when they're in dire need.

Over the last decade, FPU has continued to provide a variety of emergency support to more than a dozen journalists affected by Somalia ongoing conflict.

Reporters Respond is an emergency fund for journalists directly in need for help. It is an assistance aimed at helping independent reporters get back to work in order to guarantee reliable reporting.