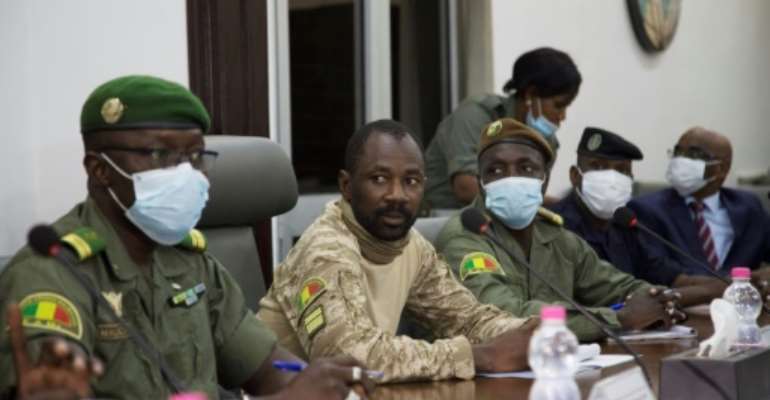 Colonel Assimi Goita, centre, has been granted presidential-like powers as head of the new junta, according to a document posted on Mali's official gazette. By ANNIE RISEMBERG (AFP)

West African countries on Friday demanded an immediate civilian transition in Mali and elections within 12 months as they considered sanctions after rebel troops toppled the country's president and seized power.

The demands were spelt out after the new junta released ousted president Ibrahim Boubacar Keita, seized in the August 18 coup, but also apparently granted their new chief the powers of head of state.

After a video summit, the 15-nation Economic Community of West Africa State called on the junta "to initiate a civil transition immediately" and the "rapid establishment of a government to (...) prepare the legislative and presidential elections within 12 months."

In a closing statement, Niger President Mahamadou Issoufou, who also chairs ECOWAS, said sanctions would be "gradually lifted depending on the implementation" of the bloc's requests.

"Staging coups is a serious sickness for a country," he said in earlier remarks. "To cure them, there's only one prescription: sanctions."

ECOWAS slapped sanctions on Mali after the August coup, including a closure of borders and ban on trade and financial flows.

It demanded the release of Keita and other detained leaders and insisted on a swift return to civilian rule.

But his popularity crashed as he failed to counter the country's raging jihadist insurgency and brake Mali's downward economic spiral.

After an escalating series of mass protests, young army officers mutinied on August 18, seizing Keita and other leaders and declaring they now governed the country.

They have called the junta the National Committee for the Salvation of the People (CNSP), led by a 37-year-old colonel, Assimi Goita.

Friday's video summit came after a three-day ECOWAS visit foundered over a timetable for civilian transition, and the junta's announcement on the eve of the conference that Keita had been freed.

Issoufou said Keita had told the ECOWAS envoys "that he resigned quite freely, convinced that this decision was necessary for peace and stability in Mali."

Within hours of taking control, the junta promised to enact a political transition and stage elections within a "reasonable time."

This was rejected by the ECOWAS team, which called for an interim government, "headed by a civilian or retired military officer, to last for six or nine months, and maximum of 12 calendar months," Jonathan said on Wednesday.

ECOWAS on Friday said that the person overseeing the handover should be "an individual, civilian, recognised... for their intellectual and moral standing" and that there should be a "civilian prime minister."

A rally organised last Friday by a protest coalition cheered the junta for toppling Keita. Its leaders have vowed to "work with" the military over returning the country to civilian rule. By ANNIE RISEMBERG (AFP)

"No military structure should be above the transition president," it said.

But a new document posted on Mali's Official Journal, a gazette which publishes new laws and regulations, invests the head of the CNSP with the powers of the head of state.

The CNSP "designates a president who assures the duty of the head of state... embodying national unity... and guaranteeing national independence, territorial integrity... (and) respect for international agreements," it says.

This individual appoints senior civil servants and military and "accredits" foreign ambassadors, according to the document. AFP has asked the junta's spokesman to confirm its authenticity.

In other remarks, Issoufou lashed the Malian military for launching the coup when the country was in the throes of an eight-year-old jihadist insurgency.

The junta "is refusing to return to the barracks at a time when, more than ever, the army is required to focus on its traditional mission," Issoufou said.

He warned that the jihadists sought to "exploit the current institutional void" -- a scenario that happened after Mali's last coup in 2008.