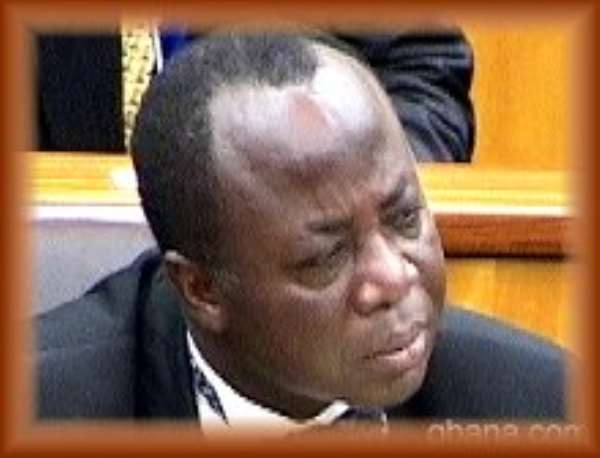 The First Deputy Speaker of Parliament and the Convention People's Party (CPP) Member of Parliament (MP) for Ellembelle in the Western Region, Mr. Freddy Blay, has mounted a blistering attack on his party leadership. According to him, it was totally out of place for the leaders of his party to consistently subject CPP MPs to unwarranted attacks for not criticizing the government; an action the leadership of the party argues could have helped project the CPP in Parliament.

In an exclusive interview with The Chronicle last Friday, he said he was not elected by his constituents to attack the government, but to ensure the living standards of his constituents improved through the provision of good schools, hospitals, electricity, good drinking water, affordable education, among others, which in his opinion the current administration was doing.

Mr. Blay said he, as First Deputy Speaker of Parliament, Dr. Paa Kwesi Ndoum, Minister for Public Sector Reforms and Chairman for the Millennium Challenge Authority (MCA), and Mr. Kojo Armah, member of the Legal and Constitutional Affairs Committee of Parliament, had no mandate to attack the ruling government because they have seen the NPP government doing its best in terms of education, agriculture and others.

According to him, he would not wage unnecessary war on government because that would only be a way of creating an opportunity for the National Democratic Congress (NDC) to regain political power.

The Deputy Speaker underscored that it was unimaginable to hear people calling on them to work or speak against the government, which if they did would benefit the only NDC and not the CPP.

“I would not work for the coup makers to re-assume governance and draw us back into the dark days,” he cautioned. “Those who are attacking us or asking us to do that are NDC sympathizers.” He further dismissed assertions that they were 'in bed' with the incumbent government, saying, “It is ridiculous for people to say that. The government is doing it's best. Yes, I am grateful to the President for making me serve in his government. I cannot oppose everything that it does; I am not in Parliament to be launching missiles at the government,” he reiterated.

He continued, “Let us not create conditions for the NDC to come back to power to do what they used to do. The current government is doing well – maybe their best may not be enough, but so far there has been improvements.”

The CPP capo maintained that since their assumption of power, the NPP government had stabilized the economy, developed hospitals, improve schools' infrastructure, created jobs for the people, and even reduced taxes to the extent that banks were now chasing customers to give out loans. “In fact some of us believe in some of the policies of the NPP and such policies are those that CPP would adopt if it is in government; I therefore see no reason to attack them,” he elaborated.

According to him, he and his colleague MPs of the CPP who had been at the receiving end of condemnations would have wished the CPP were in power and noted that the party unfortunately had no structures or party offices to effectively fight for power. The Ellembelle MP said, “The way forward for the party is for the leadership to give way by resigning from their positions because they are suffering from lack of ideas.

“They are full of inertia. They should organize themselves to raise MPs to come to Parliament and do what they want.” Asked whether they should resign honorably since it is the congress that would determine the fate of any of the current leaders, he admitted that some of the leadership problems could also be attributed to delegates for allowing “people without vision to lead the party.” On the divisions within the party, he said, “In every organization, there are problems. It is not the responsibility of a few people to organize the party,” he reminded.

“I don't see the CPP winning the 2008 elections because I don't believe in miracles. No miracle can work for the party, which is weak on the ground.

“We don't win elections on radio stations. It would be political sickness to say we are winning 2008 general elections,” admitted.

I'm not bothered about a likely coup, I worry of possible up...
2 minutes ago