By Vianney Ingasso with Camille Laffont in Paris 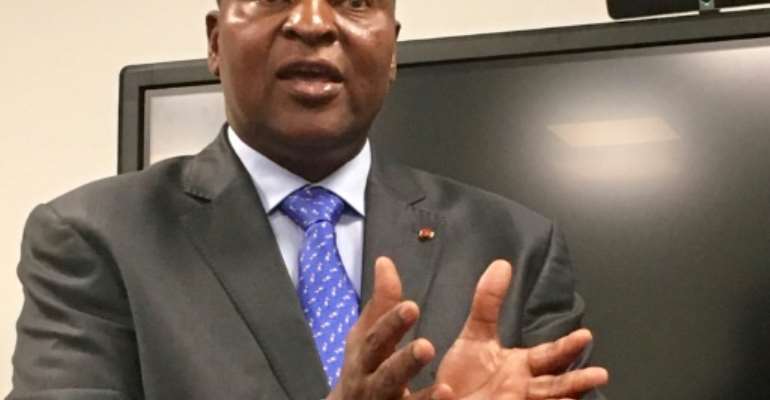 In the Central African Republic, a country with a history of coups since independence from France 60 years ago, the ouster of Malian president Ibrahim Boubacar Keita has brought back dark memories.

In 2013, the Seleka, a rebel coalition drawn largely from the Muslim minority, toppled then-president Francois Bozize, plunging the CAR into a spiral of violence that continues today.

The fragility of the state is visible whenever his successor, Faustin Archange Touadera, ventures forth.

The president is accompanied by armoured vehicles, pickup trucks carrying soldiers and an ambulance with screaming sirens, in a convoy travelling on roads closed to traffic.

"The Malian syndrome could be happen here," said Edgard Kette-Djama, a teacher in Bangui. "We have an army that is politicised. Signs of frustration can be seen among the population."

There are just four months left before presidential and parliamentary elections, and Touadera's problems are evident.

Elected in 2016, he has failed to crack down on two issues of deep concern -- entrenched corruption and militias that control two-thirds of the CAR's territory.

The militias still inflict many civilian casualties, despite a peace accord signed in 2019 and the presence of 11,600 peacekeeping troops in the United Nations mission in the CAR (MINUSCA).

As in Mali, the presence of UN troops sits ill with much of the population. Many people here say the peacekeepers are too passive with the militias.

This perceived weakness may be a temptation, said Nathalia Dukhan, a researcher with the US anti-corruption watchdog The Sentry.

"The leaders of the armed groups now think that the UN presence is no obstacle to violently overthrowing the regime in Bangui," Dukhan observed.

On the other hand, the mandate of the UN mission in the CAR is crucially different from that in Mali.

Its forces in the Sahel have been deployed against a jihadist revolt that began in northern Mali in 2012 and has since spread to the centre.

In the CAR, foreign troops can in theory intervene to protect the country's institutions.

"The preservation of constitutional order is an essential part of action by MINUSCA," said Hans De Marie Heungoup, an analyst with the International Crisis Group (ICG).

Guarded by Rwandan UN soldiers and Russian security agents, the Renaissance Palace of the head of state would put up serious resistance to rebels or mutineers from a depleted national army already under an international arms embargo.

If a coordinated assault like that of 2013 seems pretty unlikely, the volatile situation raises fears of other scenarios such as an attack on the president or a popular uprising led by the opposition.

Coming from an ethnic minority and with no electoral base, Touadera has had to make compromises with clans locked in rivalry to grab power.

He can count on a solid electoral system and support from Russia, but his position remains fragile.

The worries of the presidential majority are focused on former president Francois Bozize, a soldier who seized power from Ange-Felix Patasse in 2003 following several successive coup bids.

Bozize himself lasted a decade before he was toppled.

Bozize has cast a shadow over Touadera's government since returning from abroad last December. By FLORENT VERGNES (AFP)

Returning to Bangui last December after seven years in exile and becoming a presidential candidate, Bozize today presents himself as "a man of peace," an assertion that does not convince many adversaries that he has turned the page.

A member of the country's majority Gbaya community, he has much support in the army and among the so-called anti-Balaka -- the Christian militia who took up arms against the Seleka rebels in 2013 and 2014 and played a major part in the country's downward spiral.

In March, several leaders in the anti-Balaka movement were arrested, officially because they had had an "unauthorised" meeting at the home of a minister.

Several days later, officers close to Bozize were detained in Bangui with military weapons in their possession, prosecutors say.

But whether this is a precursor of violence is far from certain -- and Heungoup notes that the government "also uses the fear of a coup to discredit" Bozize.

Another factor in the coup equation is that the CAR's public is deeply repelled by the country's endless cycle of dramas and bloodshed.

Touadera has never been very popular but unlike Keita in Mali, he has never faced wide-scale protests -- and winning over the public for a mass revolt would be a major challenge for any would-be putschists.