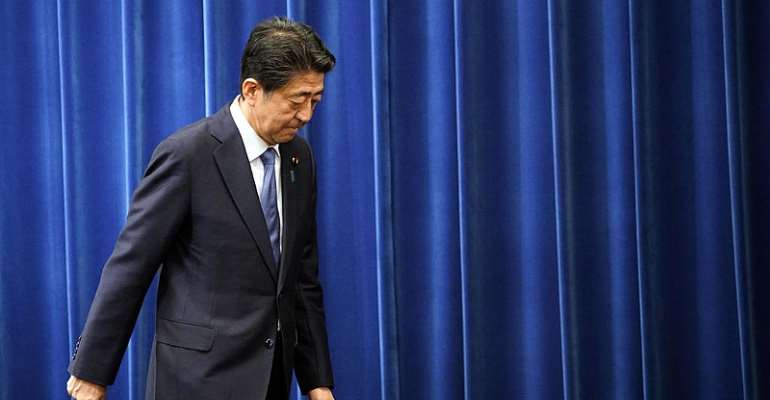 Japan's longest-serving prime minister, Shinzo Abe, said Friday he intends to step down because a chronic health problem has resurfaced. He told reporters that it was 'gut wrenching' to leave so many of his goals unfinished.

Abe has had ulcerative colitis since he was a teenager and has said his condition was controlled through treatment.

Concerns about his health began this summer and grew this month when he visited a Tokyo hospital two weeks in a row for unspecified health checkups.

Abe said he was on a new treatment that required IV injections.

While there had been some improvement, he said, there was no guarantee that the treatment would cure his condition.

“It is gut wrenching to have to leave my job before accomplishing my goals,” Abe said Friday, mentioning his failure to resolve the issue of Japanese abducted years ago by North Korea and a territorial dispute with Russia.

He said his health problem had been under control until earlier this year, but suffered a relapse in June at the time of his annual checkup.

Era of stability
In a country where prime ministers never were in office for a very long period of time, the departure marks the end of an unusual era of stability that saw the Japanese leader strike up strong ties with U.S. President Donald Trump even as Abe's ultra-nationalism riled the Koreas and China.

While he pulled Japan out of recession, the economy has been battered anew by the coronavirus pandemic, and Abe has failed to achieve his cherished goal of formally rewriting the U.S.-drafted pacifist constitution because of poor public support.

Abe visited France in April last year, when he discussed the future of the Renault-Nissan alliance and the investigation in Tokyo into alleged financial misconduct by its former boss Carlos Ghosn with French President Emmanuel Macron. Macron paid a return visit to Japan in June of that year.

Political blue blood
Abe is a political blue blood who was groomed to follow in the footsteps of his grandfather, former Prime Minister Nobusuke Kishi. His political rhetoric often focused on making Japan a 'normal' and 'beautiful' nation with a stronger military and bigger role in international affairs.

Abe, whose term ends in September 2021, is expected to stay on until a new party leader is elected and formally approved by the parliament.