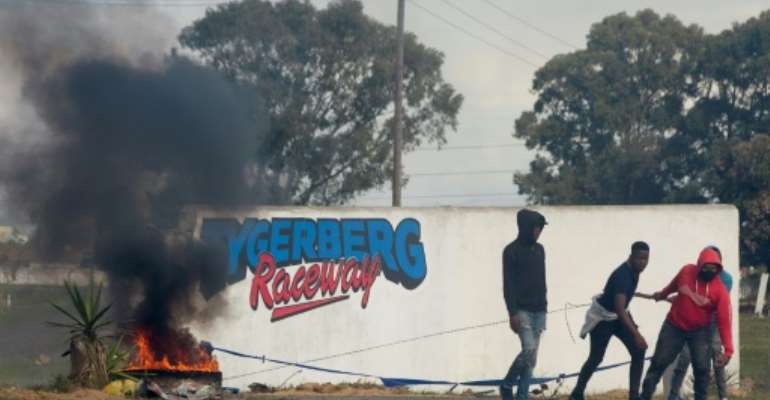 Young men haul a burning tyre during protests at Tygerberg Raceway near Cape Town. The motor-racing venue was invaded on August 6 by people demanding land. By RODGER BOSCH (AFP)

Coronavirus has magnified the land and housing crisis in urban South Africa, where the legacy of apartheid has placed a crippling burden of inequality on the country's non-white majority.

Already struggling to gain access to a decent home or land, many vulnerable South Africans have been badly hit by the COVID-19 pandemic.

Some have illegally settled in disused urban spaces and buildings, resulting in forced evictions by the authorities.

These "land invasions" are a familiar feature of life in South Africa, but their frequency seems to have increased since the country went into anti-coronavirus lockdown five months ago.

Some of those evictions turned violent, as residents refused to abandon their newly-built shacks and clashed with police. On Monday, stray rounds fired by landless citizens killed an eight-year-old boy and wounded a 12-year-old girl.

Cape Town mayor Dan Plato said there had been over 30 "violent and coordinated land invasions" over the past six weeks.

"We are nearing the point where we will probably do in a month-and-a half... what we did in an entire year," said municipality safety chief Jeanne Pierre Smith.

Around 50 city officers effecting the evictions were wounded and several cars were damaged.

But this week the city was dealt a blow in its bid to curb land invasion.

A High Court ruled that from now on, court orders would be required to demolish or evict illegal occupants while a coronavirus-induced national state of disaster remains in place.

The order arose from a case brought by South Africa's human rights commission and the radical left-wing Economic Freedom Fighters party after a viral video showed police officers dragging a naked man, Bulelani Qolani, out of his single-room shack during an eviction blitz.

Destroyed: A shack that had been illegally built on a nature reserve outside Cape Town. By RODGER BOSCH (AFP)

Officers then proceeded to demolish his home, located in the township of Khayelitsha.

Land ownership by Black people is a long-standing struggle in South Africa.

During apartheid, non-white citizens were not allowed to own land.

Every year hundreds of thousands of people migrate to cities in search of employment and they set up peripheral informal settlements that have only continued to grow.

"Impoverished, unskilled people stream into cities that just weren't designed to accommodate those kinds of numbers."

Government is working on a constitutional amendment enabling land expropriation without compensation.

Not ruling out that there are some people who simply have nowhere to go, mayor Plato believes the latest invasions are premeditated attempts for political and economic gains.

Land crisis: A protest placard at an informal settlement in May 2019 in the northern city of Polokwane. By GUILLEM SARTORIO (AFP)

He said truckloads of people with personal belongings arrive at a chosen piece of land at night and use the cover of darkness to set up shacks.

"To put it bluntly, people illegally invade land for the financial pay-off," said Plato. "They occupy the land illegally and then sell pieces of land."

But there is an undeniable link between anti-coronavirus confinement measures and the spate of land invasions.

Economic hardship has left many back-yard dwellers in townships without money for rent.

Kicked out by landlords, they are forced to relocate to open spaces.

At times they move on to flood plains or wetlands sometimes or simply occupy land set aside for other developments.

"I'm not doing this for something small," said Tyrone Pietersen, a land occupier in Cape Town's Delft suburb.

De Sagte estimates there are more than one million back-yard dwellers across the country.

"Covid-19 and the impact of lockdown has created unprecedented levels of desperation," he said.