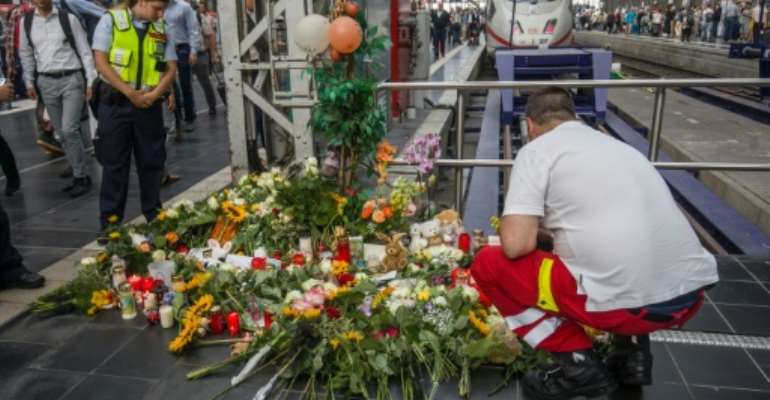 People left flowers at a makeshift memorial in the days after the eight-year-old was killed. By Frank Rumpenhorst (dpa/AFP/File)

An Eritrean man who fatally threw a boy under a train in Germany will be placed in psychiatric care, a court ruled Friday at the end of a politically charged trial.

The district court in Frankfurt found that Habte Araya, 41, pushed the eight-year-old boy and his mother onto the tracks in an apparently random attack at Frankfurt's main station in July 2019.

The judges ruled that while he could not be held criminally responsible due his "acute paranoid schizophrenia", he still posed a danger to society and should be confined to a mental hospital.

The mother of the boy was able to roll off the tracks to avoid the oncoming high-speed InterCity Express train, but the boy was killed instantly.

Araya, who had entered Germany from Switzerland just days before the incident, was also accused of trying to push a 78-year-old woman onto the tracks, though she managed to save herself.

The attack stunned Germany and stoked a heated debate on immigration and security.

A psychiatric expert who examined Araya had told the court on Thursday that the accused was experiencing an episode of paranoid schizophrenia at the time and continues to suffer from a "pathological mental disorder".

The expert recommended that Araya be placed long term in a secure psychiatric facility.

Prosecutors and Araya's own defence team supported the recommendation.

Araya apologised in a written statement read by his lawyer at the opening of the trial on August 19.

"I am infinitely sorry, especially for the family," he said, admitting that the crime "must have happened according to all the information I have received", though he could not remember it.

The tragic case led the far-right AfD party to call for tighter controls on foreigners entering Germany, although the suspect was not in the country illegally.

A married father of three, Araya had been living in Switzerland and was on the run from Swiss police after a violent incident the previous week.

He had threatened a neighbour with a knife and locked her up, and also trapped his wife and their children, aged one, three and four, in their flat before running away.

Police said it appeared the suspect had not been listed as wanted in European police databases and had been able to cross borders freely.

Araya had been living in Switzerland since 2006 and was granted asylum in 2008.

According to the Bild newspaper, he had worked for a local transport company and was described by authorities as "an example of successful integration".

He was even featured in a campaign by Swiss authorities to promote positive integration.

Latest Photo Reports
Catch up with all the political quotes from our politicians.
Advertise here
More Africa
ModernGhana Links
Fired-up All Blacks chase Rugby Championship whitewash
Bekele reveals plan to run marathon in under two hours
Working session of the Technical Committee for the selection of beneficiaries of the Young Graduates Internship Programme in ECOWAS institutions, 2021 edition
Niger speeds up efforts to build first hydroelectric dam
Soul-searching for Boks ahead of 'special' 100th All Blacks clash
Mandela to 'House of Pain': Five epic Springboks v All Blacks matches
'God Has a Dream': top seller for Tutu's 90th-birthday auction
The race to vaccinate: why Africa is struggling to get Covid jabs
Sahara camel race glory brings boy jockey big dreams for his future
TOP STORIES

W/R: Adiembra residents save 17-year-old student from kidnap...
5 minutes ago