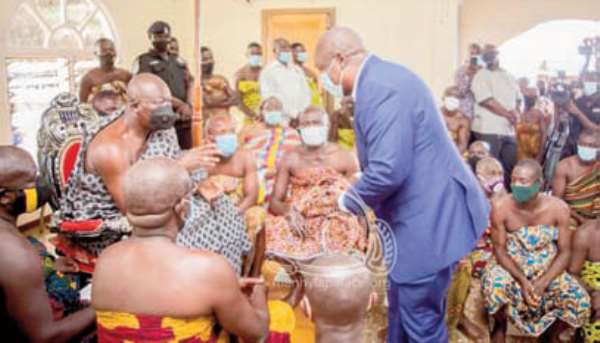 When he was addressing the Asantehene at the Manhyia Palace in Kumasi, he accused the President and his New Patriotic Party (NPP) administration of neglecting Asanteman to the dismay of the gathering.

According to Mr. Mahama, his erstwhile National Democratic Congress (NDC) government commenced what he claimed to be wonderful and landmark projects for Asanteman, but the region had woefully been neglected since the NPP won power.

To buttress his claim, he readily pointed at the modern Kejetia Market, works on the first phase of the Kumasi Airport, some roads he called 'cocoa roads' among others he said his government executed in the region.

“The NDC government, led by me, did a lot of projects and also transformed Asanteman, but nothing seems to be working for the region now in terms of development ever since the NDC lost power in 2016,” Mr. Mahama claimed.

The 2020 NDC presidential candidate claimed that Asanteman was currently retarding in development because the NPP administration lacked the wherewithal to lead the region into proper growth.

For instance, he said small-scale mining, which provided jobs for some of the youth in Asanteman, had virtually been collapsed by the 'insensitive' NPP government, thereby heightening abject poverty in the Ashanti Region.

According to him, the NPP has allowed partisan politics to enter the small-scale mining sector, as only those that have strong links with the NPP were being allowed to operate in that sector.

“The NPP government has seized concession and excavators of some players in the small-scale mining sector and given them to their members and that is in bad taste,” Mr. Mahama alleged in the presence of Otumfuo.

He assured the Asantehene that if the NDC won the December 7 polls, all the anomalies in the small-scale mining sector would be rectified in order to restore decency and total progress in that crucial sector.

“The NDC stands for social justice, so my government will make sure that all whose excavators and concessions, issued by the Minerals Commission, which have been seized and given to NPP members, would have them back,” he declared.

Mr. Mahama said the country's natural resources, especially gold, should benefit everybody, and it should be devoid of religious, tribal or political affiliation. Besides, he lambasted the NPP for not doing enough to boost small-scale mining.

He said his NDC government would lawfully regulate small-scale mining by introducing corporative mining with mining safety officers, regularly visiting the mining sites to make sure that the environment was not destroyed in anyway.

Bizarrely, when he had a few days to leave power after being defeated massively in the 2016 general election, Mr. Mahama granted a huge bauxite concession worth billions of dollars in the region to his brother's company.

However, he said his next administration would value the environment; therefore, it would make sure the miners pay a fee to reclaim the mined areas, saying “the gold we have in Ghana should benefit all of us.”

He then switched to plea for votes and urged the electorate to vote massively for the NDC on December 7.

He said the electorate, especially those in the Ashanti Region, which is the stronghold of the NPP, needed the NDC in political office so that they (NDC) would implement what he claimed to be better and pragmatic policies and return the region and the country to the path of prosperity.

The Asantehene, in his response, admonished ex-President Mahama to first identify the mistakes that led to his massive defeat in 2016 and correct them, especially as he seeks the votes of the electorate on December 7.

According to Otumfuo, the NDC flagbearer should be able to point out his own faults to the public and preach about what he would do differently this time as he seeks a comeback.

Besides, the Asantehene admonished Mr. Mahama and his NDC campaign team to campaign on what they achieved when they were in government and sell the policies they would introduce to improve the country.