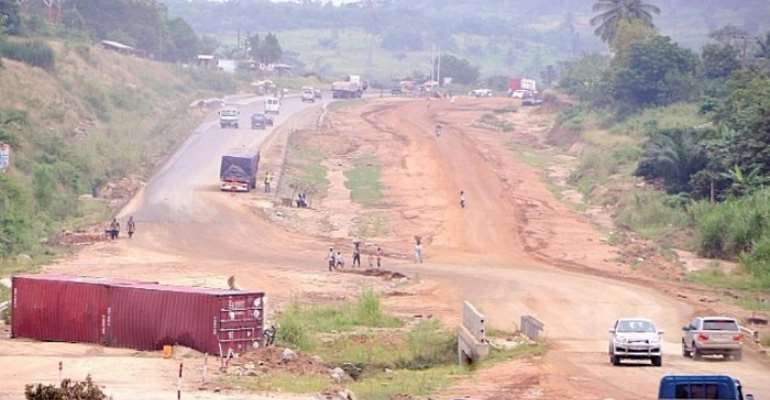 Owners of properties earmarked for demolition to pave way for the dualization of the Accra-Kumasi Highways are demanding compensation from the Ghana Highways Authority (GHA).

The aggrieved property owners have therefore placed an interlocutory injunction on mass demolition exercise started by the GHA.

A letter issued to the affected property owners and signed by then Acting Chief Executive officer of the GHA, N.D. Brown, ordered the owners to remove their properties within the road reservation before 19th April 2020 to pave way for the dualisation road project to commence and that compensation had long been paid to those who were in occupation of the acquired road corridor.

The letter further stated that demolition was going to take place on all properties extended into the road reservation (45m from the existing road centre line) acquired by government of Ghana (GOG) by Executive Instrument (E.I. 17) dated September 16, 2005.

However, it directed property owners with concerns to contact the Chief Valuer of the GHA for redress of any compensation-related issues.

But According to the affected property owners, including owners of fuel stations, schools, hotels, shops, mosques and clinics among other structures, GHA has refused to negotiate compensation with them but attempted to demolish their structures hence their decision to injunct the exercise.

According to them, they were not part of those few property owners compensated in 2013 since their properties were not affected until the dualization project.

“There is an Injunction on them not to touch any property until the matter is heard. Our next court date is October 30, 2020. It is from Dobro right to Amasaman along all the stretch. I could say over 500 to 600 properties, some people took some compensation and those who took the compensation know that they have taken, especially lands around Medie and Doboro which I think they may represent about 30% of those affected. Majority of us have not been compensated”.

“At the time of the issuance of the EI there was just existing road which was not dual carriage. I think 2008/2009 there was this dualization again then they are trying to say that the centre or the median that the EI stated is the dual carriage which is in existence now which is contrary stated because the EI stated that the median was on the existing road at that time which was only two-lane from the existing road at that time which was only two-lane so we were taking it at that point that that was the median. So now if you want to dualize the road you need to evaluate the affected properties and pay as deserving compensation but before we can talk about compensation we should know where the middle of the road was, ” Kwaku Agyei owner of Celhome hotel who is one of the leaders of the aggrieved property owners told Starr News.

The National Highway 6 is a national highway in Ghana that begins at the Nsawam road junction off the N1 in Accra and runs through Nsawam, Nkawkaw, and Ejisu to Kumasi, where it meets the N4. The road also links Ghana to other West Africa countries.