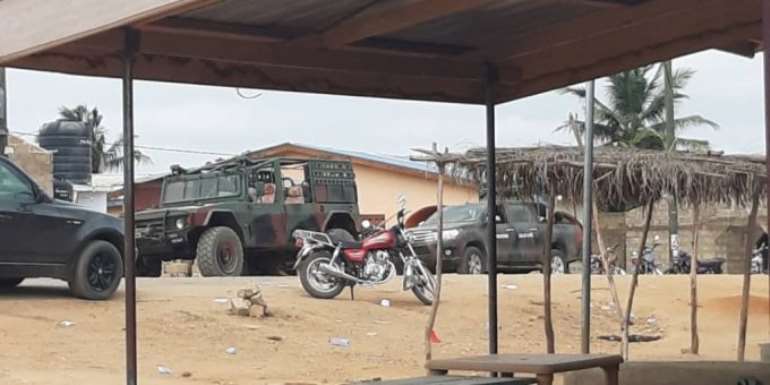 The Domeabra Obom Youth Association (DOYA) has called for the immediate arrest of the Mponuahene of Akyem Apadwa for allegedly causing the clash recently experienced in Dome Faase.

According to the group, the attempt by the chief to illegally claim lands not belonging to him using the military to intimidate others and cause confusion, saw residents fleeing the area.

Speaking at a press conference president of DOYA, Emmanuel Nii Okai Armah said a full-scale investigation must be conducted by the security agencies.

Hundreds of fear-stricken residents in the area on Wednesday fled following the crash that left a number of people, including two military personnel, injured.

The incident led to the deployment of more military personnel to the town.

The coalition of Ga communities had alleged that the Mponuahene of Akyem Apadwa and the Akyem Traditional Council in the Eastern Region were taking their farmlands from them hence the resistance that led to the chaos on Tuesday, August 25, 2020.

Emmanuel Nii Okai Armah, the president of the youth group in Domeabra Obom accused the government of backing the Nkonuahene of Akyim Apadwa to forment trouble in the area.

“Mponuahene has the support of government to engage in this roundly condemnable conduct. Domeabra Obom constituency was peaceful until he decided to ride at the back of coercive apparatus of State to harass constituents.”

Read the full statement from the youth group below:

We are compelled to come out to set the records straight under extremely difficult circumstances. Majority of Ghanaians, if not all, have read reports on the brutalities being meted out to innocent residents of Domeabra Obom constituency by armed uniformed men believed to be operatives of the Ghana Armed Forces. Unfortunately, media reports on the issues have, sorry to say, been laden with half-truth, and in some cases, outright fabrications. What was a clear case of unwarranted meddling in land disputes by persons regaled in Military informs, has been turned into attacks on the military because two hoodlums who have no justification to invade Domefaase to provide landguard duties to a private citizen was unfortunately assaulted in what could be described as an ensuing melee.

It is on record, and this is undisputed, that any time Domeabra Obom attracted headlines of news tabloids, it was for all the refreshing reasons. However, since the inception of the Akufo Addo government, the constituency is gradually taking a cloak of Chameleon-hued words where our hitherto pleasant stories are being mixed with unpleasant news. One of such happenings, which we can confidently conclude that, it has the unwavering support of the State, is the ongoing beatings and violation rights of unsuspecting people in the various villages in the constituencies. Some of you may say we have overstretched our hand to draw the government into a land dispute between two rival tribes. This thinking cannot stand the test of logical reasoning when the facts on the ground are pieced together. And we will share some with you which will tune your minds to fall on our conclusion.

Historically, the present day Domeabra Obom Constituency, which was part of Ga West Constituency, was part of the total land size of Greater Accra region. At no point in time, not even when there was no proper documentation in pre-colonial days, was it suggested, not even remotely, that the land covering Domeabra Obom constituency is part of Eastern region under the authority of Akyem Abuakwa Traditional Council. Beyond oral history, official documentations point to the fact that it is part of Greater Accra, and the various Ga families are allodial holders.

When the constituency was first created in 2004 under President John Agyekum Kufuor, Obom remained it’s administrate capital but it was added to Weija Gbawe and Bortianor Ngleshie Amanfro (all created in 2012 with Weija Gbawe standing as a municipality on its own now) constituency to constitute Ga South Municipal Assembly in Greater Accra. When all these things happened, no chief from Akyem Abuakwa Tradition Council laid claim to the land or protested that they own the land.

The Akyem Abuakwa Traditional Council started laying claims to the land when their tribesman, Nana Addo Dankwa Akufo Addo was elected President on December 7, 2016. Seeing that a widow has opened for them to use State power to claim what does not belong to them because their tribesman is now President, the Mponuahene of Akyim Apadwa Nana Baffour Sarpong Okumakum, a subject of the Okyehene, started making claims that the whole constituency is an Akyem land and not Ga land. To make matters worse, he forcefully, without court order, pulling down buildings, destroying farmlands and other livelihood properties through sand and gravel winning and gravel in the Domefaase and Fankyinekor, all villages in the constituency. It is said to mention that all these illegal acts were supervised by supposed National Security Operatives and uniformed armed military men.

While all these illegal acts were brought to the attention of the Municipal Chief Executive for Ga South, Joseph Nyarni Stevens, who is an immediate past NPP constituency Chairman for Bortianor Ngleshie Amanfro, and the Presiding Member for the same Assembly, Mohammed Abdul Wahab, who is also NPP constituency Organizer for Domeabra Obom and immediate past Assembly Member for Obom Electoral Area, little was done about it to forestall trouble. In fact, the MCE, as head of Municipal Security Committee, plaid little or no role in calling his Party’s inspired chief to order.

The Mponuahene had for some time now being using landguards and heavily built and armed men dressed in military uniforms to terrorize people, particularly in the Paanor and Kofi Kwei Electoral Areas. Matters came to a head when the chiefs of the various villages and the youth decided to confront the issue by organizing a press conference to address the issues which MUSEC had failed them. This press conference was called this week. At the press conference, journalists requested to see the site the Mponuahene is winning the sand under supposed military protection the destruction caused to properties. The Chief, the MP and youth decided to lead the youth there. Upon getting to the site, the Mponuahene instructed the military men to beat the chiefs and the youth.

It is important to stress the point that the youth were not armed. They did not provoke the military men before they started beating them. In the course of the confrontation, two military men suspected to members of the NPP’s invincible forces but dressed in military uniform were unfortunately assaulted at Domefaase. It is again important to state that, the Mponuahene and his hoodlums mostly drove to the site in cars that had NPP flags handing in them. In fact, this was what prompted the chiefs to call the NPP Parliamentary Candidate, Philip Doe to a meeting to talk to his Party big shots to stop harassing them. He agreed to do that within two or three days only to return and tell the chiefs to go to court. A number of reports were lodged at the Police station relating to the harassment but in all instances, the Police said the Mponuahene and his men were acting on ‘orders from above’

The Mponuahene indeed, could only be acting on orders from above especially when he always had heavily armed military men following him and providing landguard duties at his behest. Account of one of the supposed soldiers, Asare Addo, who was arrested is very revealing. “We were deployed to the area by “our big men”. We were called to come and assist them [on the request of] the Mponua Hene of Akyim Apadwa Nana Baffour Sarpong Okumakum, to assist them to secure the land.”

Who are these big men that the soldier said instructed them to provide the landguard duties on request of the Mponuahene? Could it be the Commander in Chief of the Ghana Armed Forces, President Akufo Addo who himself is an Akyem? Or Could it be the Chief of Defense Staff, Lt Col Obed Boamah Akwa of the Chairman of MUSEC? If they are not the big men who ordered the military men to provide landguard duties to the Mponuahene, then who are the big men?. We demand answers to these questions because the military command has come out to say the assaulted soldiers and their colleagues were not on official duties. If they were not on official duties, who took them there and what is the military command doing to that person? Again we want to if a private citizen can now request military protection to guard a disputed land?

Despite these glaring misbehavior of the Mponuahene and the military, they are walking free. Instead, the military command has deployed their men to the constituency to beat innocent people. Women and children are now displaced as result of these action. Yesterday, it took the timely intervention of the Municipal Director of Educations to save some teachers who were arrested by the military as suspect. A number of innocent people have been beaten and over hundred people have been rounded up by the military at locations where the incident did not take place. Old ladies and children were held hostage at Obom by the soldiers without food and water for more than 12 hours.

In all these, the crude posturing of government officials and NPP Executives is baffling. The MCE, as head of MUSEC, instead of calling for the arrest of the Mponuahene for taking the law into his lands, he is rather condemning the chiefs and youth who had no option than to defend themselves. While the NPP candidate and his constituency executives are feigning ignorance of the condemnable behavior of the Mponuahene, the Deputy Minister of Defence, Maj Derick Oduro was incensed by the fact that the armed military men could not kill hundreds of the chiefs and people of the 20 communities that trooped the site. The Presiding Member, Wahab, has evacuated his family from Obom, leaving other inhabitants. Clearly, Mponuahene has the support of government to engage in this roundly condemnable conduct. Domeabra Obom constituency was peaceful until he decided to ride at the back of coercive apparatus of State to harass constituents.

We condemn the attacks on the innocent constituents and demand that the Military high command recall their men from the area. Also, the innocent people arrested should be released forthwith. We also demand the immediate arrest of the Mponuahene and his assigns if indeed they do not have the tacit backing of the State. We stand with the chiefs of Domeabra Obom constituency in this NPP government inspired provocations and attacks on them.