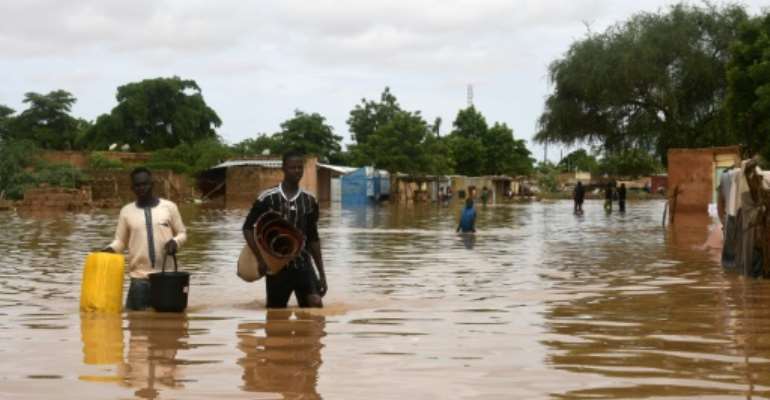 Dozens of residents in the capital Niamey fled their homes earlier on Thursday, wading or swimming through flooded streets. By BOUREIMA HAMA (AFP)

Several areas of the Niger capital Niamey remained under water on Thursday as the death toll in recent floods that have displaced over 225,000 people rose to 45, authorities said.

Around 25,000 households had been hit by the floods, a statement by the Ministry of Humanitarian Affairs and Disaster Management said.

In Niamey, where some areas have been submerged since Tuesday after heavy rainfall caused the Niger river to breach its banks, the river rose again by several centimetres after further heavy rains on Wednesday, an AFP journalist said.

Dozens of residents fled their homes earlier on Thursday, wading or swimming through flooded streets.

Teams of firefighters took to canoes to help victims.

"Until now we were in a dry place, then heavy rains came on Wednesday night and made the waters rise which took us by surprise as we slept," said Moussa Amadou, a resident of Kirkissoye, one of the worst-hit neighbourhoods.

Niger, one of the world's driest as well as poorest countries, often experiences intense rainy seasons, which typically last two or there months.

The authorities announced in July that more than 300,000 people were at risk from flooding by the Niger River and from rainwater runoff since heavy rains began in June.